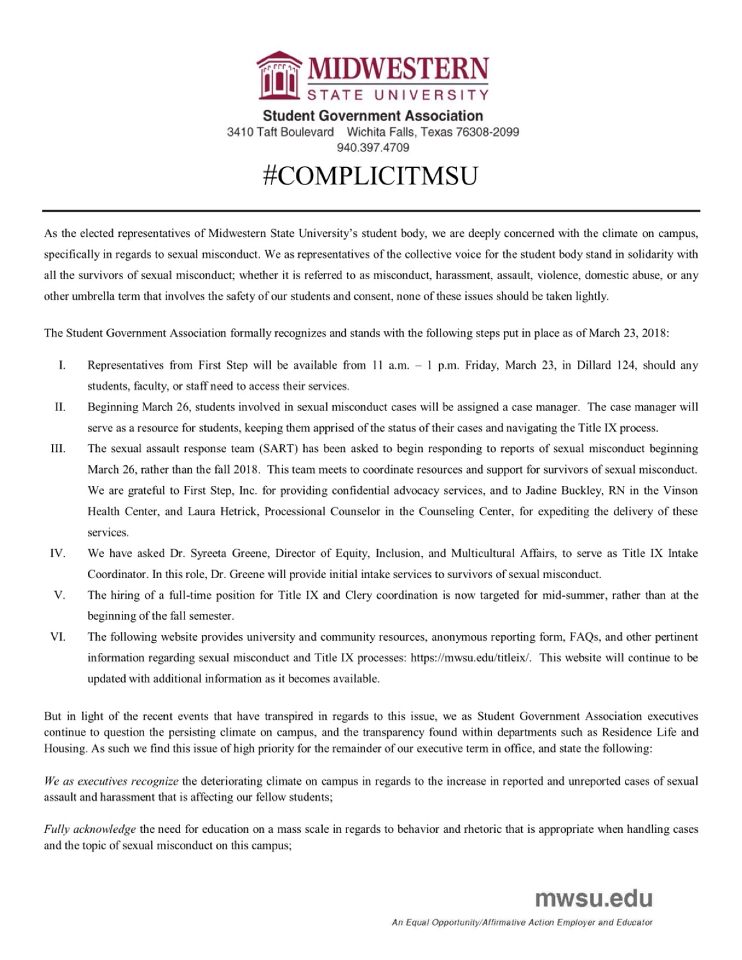 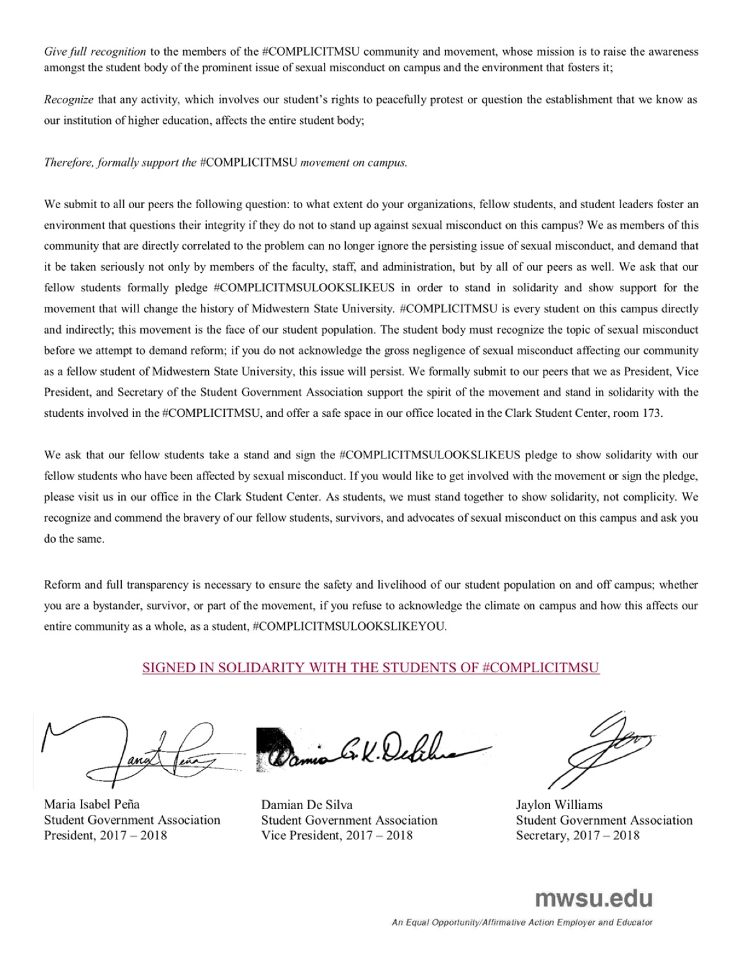 The Student Government Association 1 published a statement March 23 stating they are “deeply concerned with the climate on campus, specifically in regards to sexual misconduct,” and “…stand in solidarity with all survivors of sexual misconduct…harassment, assault, violence, domestic abuse, or any other umbrella term that involves the safety of our students.”

The statement begins with recognizing and supporting six steps put in place as of March 23 by Keith Lamb, vice president of student affairs and enrollment management . The steps outline a proactive response to the forum held on March 19, in which students voiced numerous concerns regarding sexual misconduct on campus.

Maria Peña, SGA president, insists on being proactive with the movement of ComplicitMSU.

“I’ve been watching ComplicitMSU make little marks here and there, listening to what is going on in the realm of our student life while I collectively work with administration to address these issues,” Peña said. “I am very grateful for Dr. Lamb’s efforts to prioritize this at the institutional level and for listening to all our concerns. He has been working on this and being transparent with us as students; and as a survivor of sexual harassment on this campus, that speaks volumes to me.”

The statement goes on to question transparency in the Office of Residence Life and Housing in the matter of sexual misconduct. Jaylon Williams, SGA secretary and McCullough-Trigg Hall resident assistant, said she is standing with ComplicitMSU for the safety of her residents.

“As a resident assistant, my residents’ safety and peace of mind are of the upmost importance,” Williams said. “It is a shame that my superiors care more about their image than they do about the safety of our student body.”

Peña said she believes to change the rape culture on campus, it begins with its students.

“My concern with the movement is that ComplicitMSU was started from, to my knowledge, to raise awareness of the issue and the environment that fosters this culture, within the students,” Peña said.

To continue the support for students who are victims, Peña calls upon students to change the campus climate of continuous sexual misconduct.

“If we as students want to ensure that the climate on campus is being address properly, we must have the courage to call each other out too. This movement that is student led, must be supported by students.” Peña said. “It is important to acknowledge this situation, and if as a student, you continue to ignore the climate on campus, #ComplicitMSUlookslikeyou. For now, we are asking our fellow students to take action amongst ourselves, to start addressing this at a larger scale.”

Peña, Williams, and Damian DeSilva, SGA vice president, conclude the statement asking students to pledge #ComplicitMSUlookslikeus “…in order to stand in solidarity and show support for the movement that will change the history of Midwestern State University.”