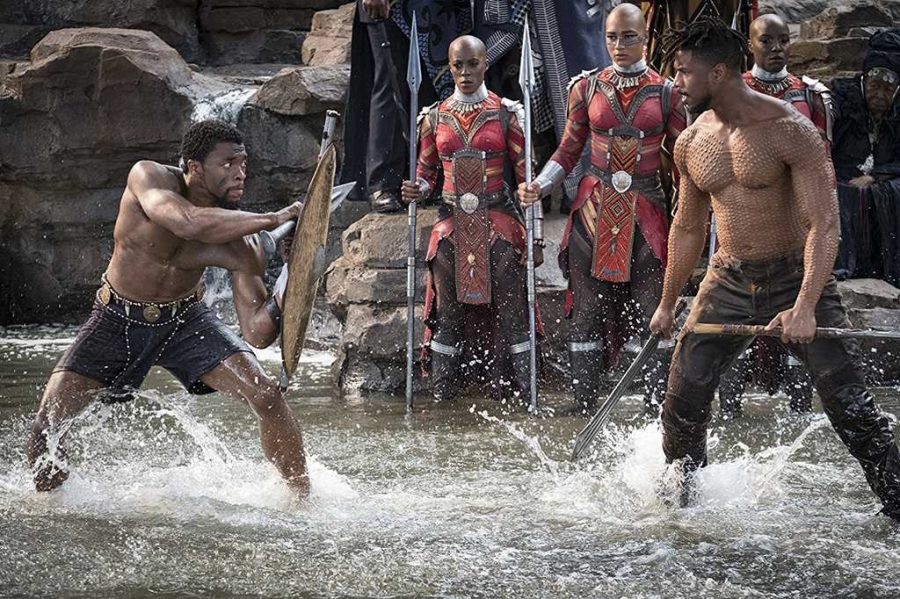 It’s no secret that Marvel’s newest superhero flick “Black Panther” has roared into theaters. Although I was sure that it could not possibly live up to all of the hype, thankfully, I was badly mistaken. With its fresh feel and amazing cast, “Black Panther” is one of the best Marvel movies to date.

“Black Panther” follows King T’Challa (Chadwick Boseman) of the fictional African country Wakanda following the events of “Captain America: Civil War.” He returns to his country for his official coronation, but trouble is in the air as his cousin, Erik Killmonger (Michael B. Jordan) challenges his right to the throne.

The cast is loaded with the best in the business. Boseman and Jordan are surrounded by four amazing actresses: Lupita Nyong’o, Danai Gurira, Letitia Wright and Angela Bassett. These amazing women portray queens, scientists and warriors and carry the film. While Black Panther is the main character, these women are truly the heroes of the story.

The production design for “Black Panther” is gorgeous. Brilliant costumes, representative of real African garb, fill the screen. The futuristic technology and sets are breathtaking.

“Black Panther’s” soundtrack is a perfect fusion of hip-hop and tribal music, illustrating the blend between the traditional and modern in Wakanda. Kendrick Lamar, rapper, spearheads the soundtrack and creates great music that can stand on its own.

The great debate in “Black Panther” centers around whether Wakanda should provide justice for the centuries of oppression of the black community, or focus on a brilliant new future.

In this way, the name “Black Panther” takes on a new meaning. It represents both the real-life militant group and the fictional role of King T’Challa. The fight for which moniker will last is central to the film. This struggle between justice and forgiveness is extremely relevant to society.

Although many may argue that “Black Panther” is merely a superhero movie, it represents so much more than that. It provides representation and role models to people who have been sidelined so often in pop culture. It encourages us to forgive and look through others’ perspectives.

“Black Panther” is the movie that we need right now. Its success sends a clear message to filmmakers that black-centered movies are wanted and that the talent is present. I can’t wait to see what groundbreaking films will follow the path laid down by “Black Panther.”

Still out in local theaters