Kalli Root applies makeup for Urinetown in the dressing room on Feb. 16, 2018. Photo by Sarah Graves

Painting a face for a musical is similar to painting a canvas- the right brushes, primer and “paint” are used to carve the actor’s face to create the desired look. This is especially true for “Urinetown: The Musical.” 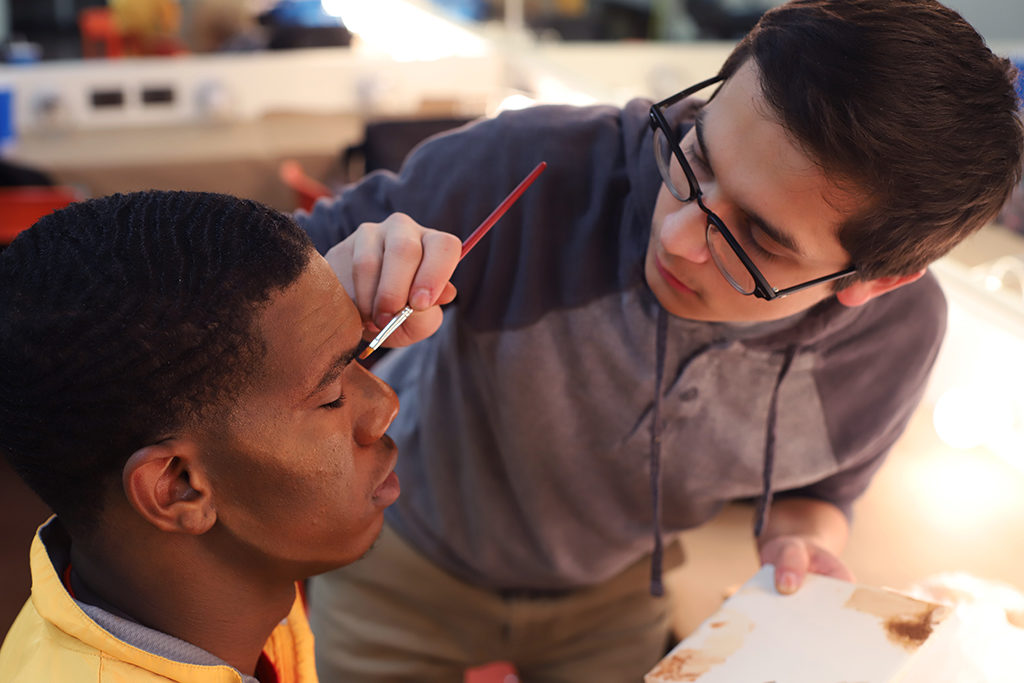 Kendall Jones learns how to apply his makeup for Urinetown from Christopher Cruz, head of makeup and Mr. McQueen, in the dressing room on Feb. 16, 2018. Photo by Sarah Graves

The “Urinetown” makeup crew, comprised of Christopher Cruz, theater junior, Abby Allen, theater education sophomore, and Alyssa Angelo, theater education freshman, worked with the actors to create the characters’ makeup on Feb. 16 during the makeup call as a part of tech week.

“Usually in a musical you have a lot of glamour-what we call beauty makeup. Musicals are often about beautiful, young things,” Lewandowski said. “In this show, we have the upper class, the people working for the Urine Good Company, and the poor people paying to pee. So we aren’t doing a lot of glamorous eye makeup or beautiful lips that we would usually do in a musical.”

Lewandowski said this show uses makeup make the societal gap more apparent. But because of the smaller cast, the actors must switch from playing the upper class to lower class; therefore, the makeup has to reflect this change.

“Some of the actors have to play members of the UGC [Urine Good Company] and poor people. They start with more glamorous makeup and then [as the poor people] they put some dirt on their faces. Many of them have to cover up the dirty again to become UGC workers,” Lewandowski said.

Cruz said he sketched the makeup designs weeks in advance, his work comes to life once actors cover their faces with makeup for the “Urinetown” production.

Many hours of work are spent developing the plans for the cast’s makeup.

Cruz sketched the designs in pencil first, then created the final design with fine details and color for the actors to see how they would look for the show to best accentuate each role.

The makeup can enhance physical features such as weight and also be used to show emotion.

Lewandowski said the features are “painted on with makeup, shadow and highlight to make them appear. Its the same way a painter would do that on a canvas. However in this case, the face is the canvas.”

Cruz said he looked for inspiration to recreate each character’s unique look.

“This play has a lot of characters, so I had to be a little creative to create my own backstories for them. Some characters are inspired by comedic characters like Little Sally,” Cruz said. “My inspiration for her was this girl named La Chilindrina from a Mexican comedy show called ‘El Chavo del Ocho.'”

Only cast members that hadn’t taken the performance makeup class and ones with outlandish features came to the makeup call on Feb. 16.

The actors must apply their own makeup before performances, but the makeup crew does the final check before actors head on stage. Cruz said this is the reason they have makeup call.

“If you look bad on stage, it looks bad on the makeup designer not on the actor,” he said. “That’s why I have makeup call,” he said.

Because Cruz also had a role in the play, Allen and Angelo checked the cast’s makeup before heading on stage.

“Since Chris [Cruz] was part of the show, he had to focus on his own makeup and hair,” Allen said. “Alyssa [Angelo] and I would help the other actors when they needed it. Like I had to do eyeliner for one of the guys, Sam [Mitchell], because he didn’t like touching his eyes. We help out whenever we we’re needed.”

The makeup often reflects the personalities of the actress. Haley Hancock, music freshman, has a loud voice that carried through her vibrant makeup to capture Little Becky’s persona.

“The goal was for me to look a bit promiscuous, and we achieved that because I’m getting all the honeys,” Hancock said as she slipped in Little Becky’s voice and character.

Hancock’s character entrances the men in the play, so her makeup needed to be coy and inviting.

Because she “doesn’t really wear makeup on the daily,” Hancock said she was nervous to do her makeup for the show.

“It’s been a while since I’ve been in a show,” Hancock said. “It’s been since my sophomore year [of high school], so I haven’t worn theater makeup in a long time.”

Much like Hancock, Kendall Jones, vocal performance and biology freshman, said he was nervous to do his makeup for his character Senator Fipp, but knows it will get better with practice because he had “never done makeup before.”

Actors who have taken the stage makeup class already had their own makeup. While the others had to buy their own.

“I literally had to get a woman in Walgreen’s to help get all of this makeup. I asked her to get me the nicest, cheapest stuff and she hooked me up,” Jones said. “The first time I try to do this myself, I’ll probably look like a fool clown, but you have to fail to get better.”

Kalli Root, English junior, who is playing Little Sally, said she came to makeup call so the crew could show her how to cover her eyebrows with a glue stick and makeup foundation and redraw them on for the show.

“I’ve never had my eyebrows completely covered before. It’s taken about 45 minutes this time, so hopefully it won’t take as long once I do it a few times,” Root said. “Chris [Cruz] said he wanted my character’s eyebrows to angle down a little bit because my natural eyebrows are fairly arched. It makes me look sad.”

While Nicole Smalls, theater performance sophomore, had experience with simple stage makeup, this over-the-top musical required a more exaggerated makeup touch for her character Penelope Pennywise than she was used to.

“In high school, I did my makeup for a musical, but it was much simpler,” Smalls said. “All I know are the basics of stage makeup, so I don’t know how to do the arch of eyebrows.”

After she attempted her makeup for the first time, Smalls laughed as saw her reflection in the mirror.

“I understand the concept, but while actually doing it, it went wrong,” Smalls said. “I drew it too long and the arch isn’t really there. I really don’t know what happened.”

To see the characters on full display, go see “Urinetown” playing from Feb. 22- March 3 in the Fain Fine Arts Theater.