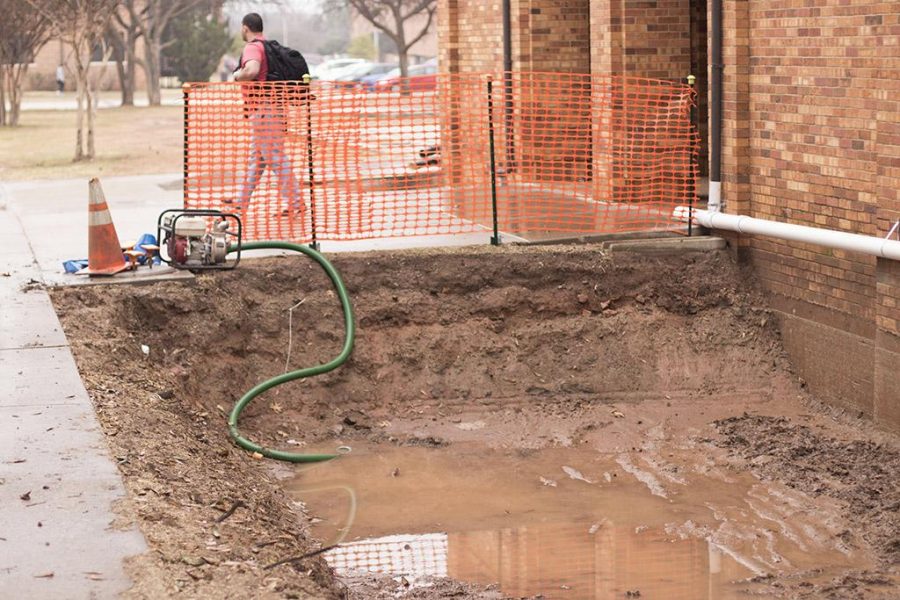 Construction of an elevator is added to Fain to bring building B into compliance with the Americans with Disabilities Act on Tuesday, Feb. 27, 2018. Photo by Francisco Martinez

As a new multi-million dollar plan is being rolled out to address compliance with the Americans with Disabilities Act, calls are being made for heightened discussion on disability to foster greater inclusion.

“Physical accessibility on campus is one thing, but it only complements the bigger picture. We want [disability] to just be normal, but you kind of have two sides; should we throw everything out there and be ‘real advocates’ or are we saying we want it to be so streamlined that nobody notices you’re doing it,” Debra Higginbotham, director of the disability support services, said.

The inclusion of braille, easier access through elevators and automatic doors in buildings and renovations to ramps are among some of the upgrades to be made in the coming months, as the Board of Regents understands that students with disabilities still face challenges of non-ADA compliant buildings. Board members approved for work on Ferguson Hall, the Hardin Administration Building and Bolin Hall this fall.

Although there is still much to be done, Higginbotham said the school has realized gradual progress over the years.

“We have made huge gains in our sidewalks; most of them are fairly smooth. We’ve invested in wider doors, curb cuts used to be random, but we’ve made a concerted effort to address that and other issues,” she said.

While only 150 people on campus are registered students with disabilities, Higginbotham said the ‘rule of thumb’ suggests that at least ten percent of the student population, 608 to be exact, have unregistered disabilities. Therefore, they are not receiving necessary support from the disability support services office.

Higginbotham said disability does not affect admission and the increase in enrollment of students with disabilities has strengthened the need for inclusion.

“The idea is you get more and more people around with obvious disabilities, but what people don’t realize is the number of students who are not necessarily going to say, ‘I have a disability.’ They don’t want to be labeled ‘different’ and that’s why our theme is: ‘Attitude is the only real disability,’” she said.

In 2012, the Association for Disability Advocacy, originally established in the early 2000s, was revamped with the intention of drawing attention to student disabilities in the 21st century. But the program, like its predecessor, fell victim to not having enough people to stay with it.

Higginbotham said the disability support services office has made significant strides over the years through activities to foster greater appreciation for the disabled community.

“We’ve hosted a number of events to provide an understanding of really how normal [disability] is. I’m not a huge fan of disability awareness where you do mimicking of disability, because it really misses the mark. It’s not so much about sitting in a wheelchair for five minutes or using a blindfold and saying this is what they go through. No, do it all day and focus on how people treat you.”

She said, however, the importance of electronic accessibility has to be underscored as key to a more seamless approach to disability, particularly as there is growing need to cater to different types of disabilities with more courses now being available online.

“All electronic communication has to be accessible. The hard sell to faculty is that they say ‘I don’t want to have to do this or do that,’ so we try to talk to them about universal design. The whole idea is you just make it like this it will be accessible and you won’t have to put a sign on it saying, ‘This is accessible.’”

Elizabeth Speegle, First Generation student and history freshman, still finds it difficult to complete particular tasks on campus as she maneuvers around in a wheelchair or at times with the aide of her  crutches.

Speegle was born with cerebral palsy, a disability described by loss or impairment of motor function caused by brain damage. Although having had multiple surgeries to be able to walk, Speegle said the biggest challenge is appearing “normal.” She said parents/guardians have a responsibility to teach their children about diversity and acceptance to stamp out ignorance.

“I’m a normal person. It’s like having brown eyes or green eyes, being white or brown skin, I just look different and more kids need to understand that,” Speegle said.

She said it is important to have a voice so other people with disabilities will be empowered.

“I can let everyone know that we have the same abilities to succeed. But it has to come across in a way that it’s not just, ‘Oh another club or event,’ or they’re not going to listen. It’s going to go in one ear and out the other. It has to be something constant,” Speegle said.

Syreeta Greene, director of equity, inclusion and multicultural affairs, said though only in operation for just about a year, her office is concerned with all forms of inclusion and that includes the disabled community.

“We want to create a foundation for the office so there’s a good infrastructure for it to grow, especially in terms of how students feel on campus regardless of their background, race, ability or the way they identify,” Greene said. “A lot of majors could use it, for instance, education majors working with students with disabilities, nurses at the hospital dealing with patients with disabilities or even in the case of criminal justice, where you have to interact with persons who have disabilities.”

She said her hope is that previous events have encouraged people to engage in conversation about this subject.

Mendelson Seaman, management information systems junior, said he has had experiences with disability on both sides of his family.

“We need to approach them with empathy not sympathy and we need to go from seeing them as disabled, to having a disability. I have a cousin and brother with disabilities and also had a grandmother who was disabled, and so I understand first-hand the importance of gaining an understanding of disability,” Seaman said. “From U.S. President Franklin Delano Roosevelt, to great artists like Stevie Wonder, we have heard the success stories. And while it is great that we are trying to improve accessibility on campus, we need to also see them beyond their disability.”

Other students such as Tatiana Corbette, biology sophomore, said they have had interactions with disabled students.

“Back in high school, one of my closest friends was physically challenged. Things like physical education were not the same for her. It created a challenge for her and most times got her frustrated,” Corbette said. “Getting to classes were a problem for her  due to stairs most times she had to take longer routes to get to class. So it was hard as her friend to see her go through those hard times, when all she wanted to do was be normal.”

Corbette reflected on her own life and how it would be different with a disability.

“It made me most times to think how sometimes I take things for granted. If I had a disability so many things that I love to do I wouldn’t be able to do. I love to sing and perform, I wouldn’t be able to do that,” Corbette said. “I would want people to not treat me different though. Most of the disabled people are some of the smartest people I know. I just feel like so much more could be done to embrace these students.”

Baptiste said, “I actually have thought about being disabled, because I used to help one of my cousins who was blind go to high school and I would always think, ‘Wow, what would I do if I had a disability?’ Life would be drastically different from the way it is now. It is unfortunate that many of us only recognize ‘physical disability.’ Infrastructure alone is not enough, we also have to change the way in which we perceive disability.”