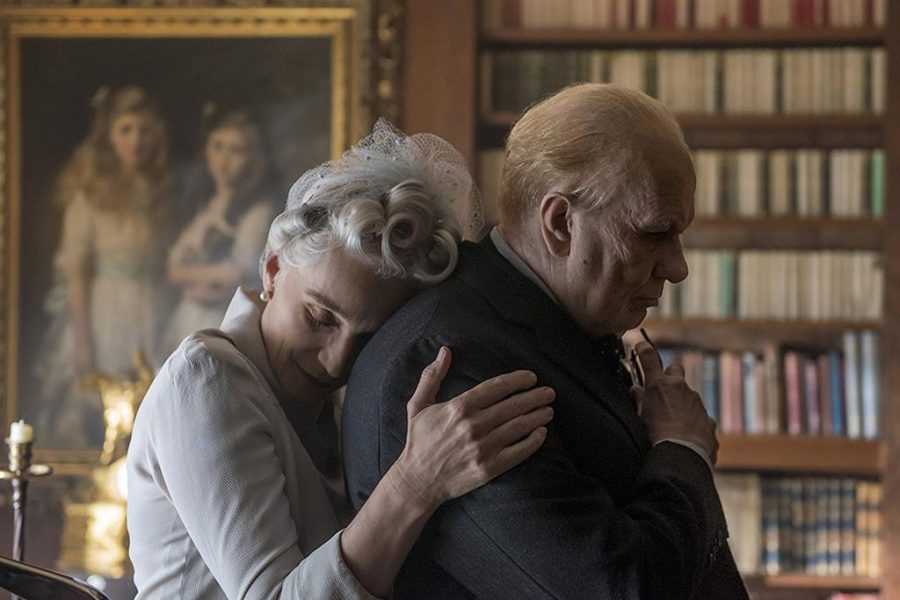 During the cold winter months, studios begin marching out huge dramas headlined with the names of Hollywood’s top drawer actors.

Telling the story of Churchill’s rise as prime minister, “Darkest Hour” is filled with sentimentality, a stiff upper lip and Gary Oldman’s award-winning role as Churchill himself.

“Darkest Hour” is set at the beginning of World War II as rumors of Hitler were growing. Britain anxiously waited to see whether the government would participate in negotiations with the Nazi regime or stand up to fight. As the country transitioned to a new prime minister, the fate of Britain lay in the hands of Winston Churchill.

Similar to many other movies about famous politicians, “Darkest Hour” focuses on the growth of a leader. Churchill, an unlikely prime minister, had to decide whether to take the easy path or defend Britain.

This film, if nothing else, is Gary Oldman’s ticket to his first Academy Award. He is virtually unrecognizable with large jowls, mumbling voice and heavy gait. While countless actors have portrayed the “British Bulldog”, Oldman breathes fresh life into the character. He clearly conveys the doubts plaguing the new prime minister and shows his growing courage throughout the film.

He hits the mannerisms just right as he barks at the people around him, drinks brandy in bed and wields his perpetually present cigar. Oldman transforms into Churchill.

Surrounding Oldman are the amazing actresses Kristin Scott Thomas, playing Clementine Churchill, and Lily James, playing his secretary, Elizabeth. Scott Thomas does an excellent job making Clementine an interesting role, leaving me wanting to learn more about this powerful woman. James, as usual, glows on screen. She deserves more recognition this awards season, as she acts as the audience surrogate in this often complex film.

While the acting in “Darkest Hour” is of the highest caliber, the rest of the movie is lacking. It works perfectly fine; the soundtrack is appropriate and the cinematography is nice, but none of it is really worth mentioning. It feels like a producer set out to give Gary Oldman an Oscar and designed this movie for that purpose. While it is inspirational, it’s forgettable.

I advise looking over some of the history of the time period as well as watching Christopher Nolan’s “Dunkirk.” This dialogue-heavy movie can be hard to follow if you haven’t refreshed your World War II history lately.

Where “Darkest Hour” fails in standing out, it makes up for in its acting. Oldman carries the bulk of the movie and does an excellent job at that, but this film would be better if the other aspects matched the level of his performance.

The timeless story of Churchill’s fight against Hitler has been told countless times. “Darkest Hour” is an inspirational film about the fight against evil. While Oldman’s performance is legendary, the rest of the film is nothing exceptional.