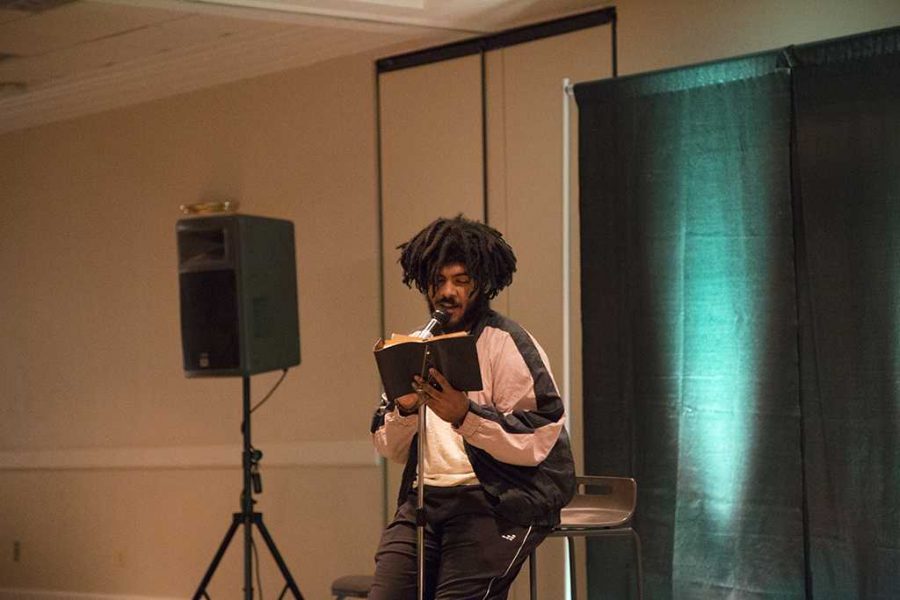 A crowd of more than 60 students gathered in the Clark Student Center Comanche Suite on Feb. 7 for the Fifth Annual Black Student Union talent show. Talents ranged from singing and dancing to reading personal poems, keeping students on their feet for each performance.

The talent show was originally scheduled to be held from 7-9 p.m.; however, it ended at 8 p.m.

Though Cuffy said she was exhausted after her dance routine, she felt the audience was to thank for her energy.

“It was great, I got a bit tired, but it was nothing,” Cuffy said. “I liked the response from the audience as well”

Cuffy had been working on her routine day and night, sometimes missing meals, and wants students to know that being determined and confident pays off in the end.

“Just keep telling yourself that you will do fine and be confident,” Cuffy said.

Performing and competing isn’t anything new to Cuffy. She has been performing for the past three years and has found that her past experience has helped her performance skills.

“I’ve been performing on stage for probably three years now,” Cuffy said. “I’ve preformed with singers, not big singers, but people that just want back up dancers. I danced at the Caribbean Student Organization Soca show. I was also a back up dancer back home for another guy friend of mine. I was also in a dance group and we did a couple performances and we also went up in the talent show and we only lost first place by one point.”

Allyson Green, BSU president and applied arts and sciences junior, hosted the talent show and felt that any production has its flaws, though she felt the event went pretty well.

“It was pretty okay, we had a couple bumps, but it was what it usually would be for most productions,” Green said.  “You know when you put things together there’s always something, but it was pretty good for the most part.”

“It went really well I enjoyed it a lot, it was very entertaining,” Windham said.

One change to the talent show from previous years was the judging. According to Green, after a quick decision due to last minute planning, this year’s judges were students chosen from the crowd through a raffle as opposed to having judges chosen prior to the event.

“I didn’t want to ask anybody last minute that was faculty or staff to do it,” Green said. “And that’s what we were coming down to, last minute asking. I was like, ‘Well, why don’t we just turn it around and just see how it goes?'”

Green said this was the first year she had seen student judges.

“It was different, I can tell you that,” said Green.”This was the first time, since I have been here, that there has ever been student judges.”

Reflecting on the event, Green said she probably will not host again.

“I would say as far as hosting, I’m not a host. I’m far from it, but [judging] has always been better in the past,” Green said. “This time around, I decided to do something and probably won’t do it again.”

One of the three randomly chosen student judges were Kaitlyn Stewart, spanish and marketing junior, who was surprised in the choice of judges for the competition as opposed to last year’s comedic judge Syreeta Greene, director of the Office of Equity, Inclusion, and Multicultural Affairs.

“It was fun, I actually liked how we were able to [judge] as opposed to last semester, and plus front row seats,” Stewart said. “Last year was Dr. Greene and she was a hilarious judge, so I just figured they would’ve gotten her again.”

Stewart said she feels the talent shared by contestants made it hard to judge, but was able to come to a decision in the end.

“They were all good, but they all had their strengths and weaknesses,” Stewart said.

Another shock that was brought to Green’s attention was the overall turnout of students who attended.

“I put less chairs in here thinking that cause right now the freshman and sophomores don’t like to get out too much,” Green said. “So I was thinking, okay we’re not gonna have more than about 50 people, but there was well over 50 people that came.”

By the end of the talent show, Green admitted her favorite act was Somo Mbalule, pre-physical therapy sophomore, who sang a personal song she had written.

“That was her own song and I was there for the auditions, so I didn’t hear that version of the song,” Green said. “So I didn’t know she was gonna rap and all that, it turned out pretty good”.

2nd- Sweatshirt from the bookstore and other items

For more events being held by BSU in the month of February follow the campus calendar.