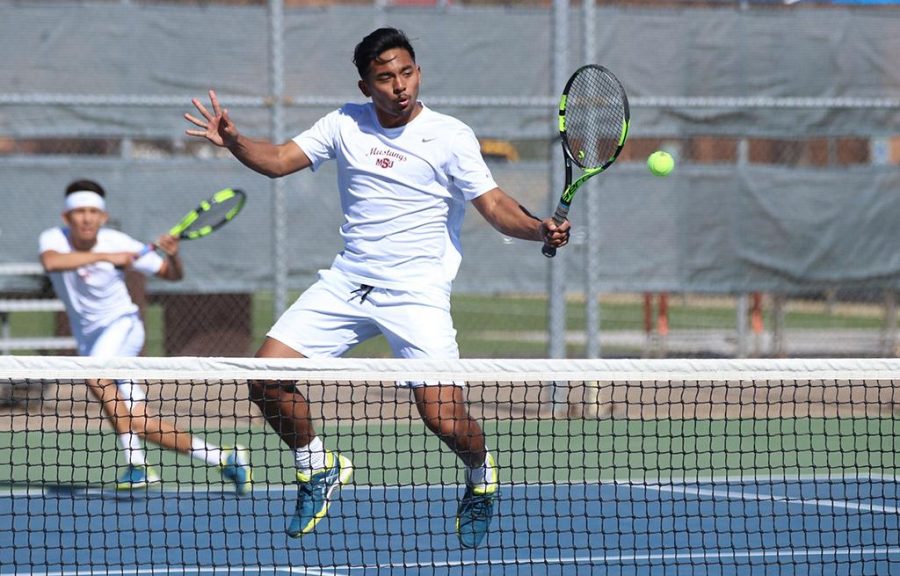 Dillon Pineda, biology junior, returns the ball back to the opponents side of the courts during Collin College vs. MSU tennis doubles meet at MSU on Friday, Feb. 9, 2018. Photo by Francisco Martinez

The men’s tennis team has completed three exhibitions and has lost two of the three. On Feb. 9 they will host a match against Collins College and then they will be headed to UT Arlington for their first conference match on Feb. 10.

“We have been practicing really hard as a team and I am really thankful that coach has been pushing us really hard, because of that I think our team is going to be really successful over the weekend,” Joshua Sundaram, mechanical engineering sophomore said.

The first exhibition of the season took place at Texas Tech University. MSU lost. The following exhibition was away at Seminole State College. The team took home the win, taking home the doubles match and almost every singles match. Their final away exhibition was held at St. Mary’s University. Again, MSU lost.

“We are young on both teams, so we just need to work on experience,” Linn said.

“There is always something to improve on no matter what,” Sundaram said. “For us as a team, our energy, finish, and focus will help us really get far and help us win nationals which will be great for this program.”

The team finished third in the conference at the end of the 2017 season. The team’s overall record was 14-11, bringing them to the first round of NCAA II Regionals. Head coach Scott Linn brought the team to the NCAA II championships five seasons in a row out of his seven seasons as head coach.