Students learn about ‘Slavery in Libya, Beyond’ 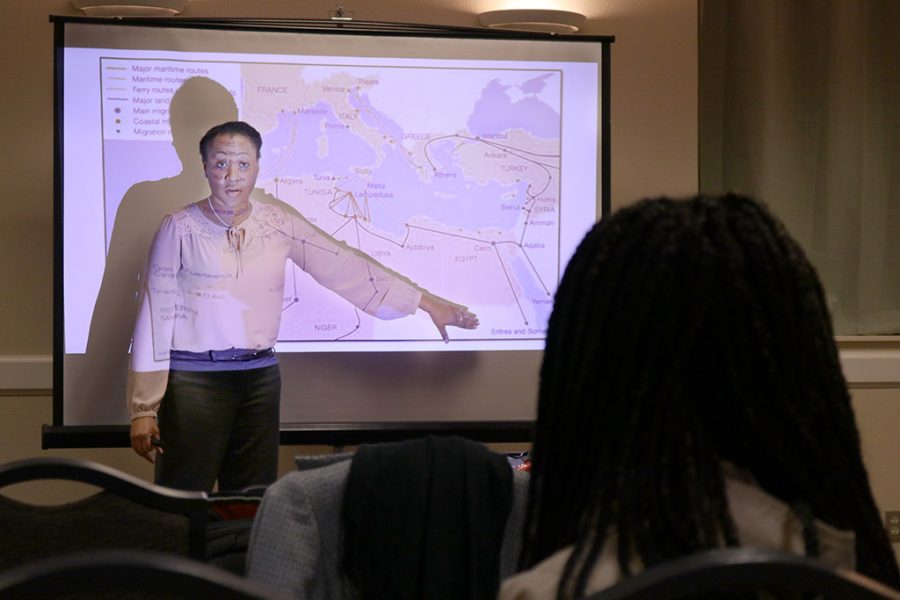 Dierrica Smith, mass communication senior, is one of the first students to attend Syreeta Greene, director of equity, inclusion, and multicultural affairs, discussion "Slavery in Libya and Beyond," on how slavery has taken a twist from your average textbook definition at Kiowa suite in the Clark Student Center. Monday, Feb. 5, 2018. Photo by Francisco Martinez

On Feb. 5, staff from the Office of Equity, Inclusion & Multicultural Affairs hosted a presentation called “Slavery in Libya & Beyond.” This presentation was about the recent discovery of a slave trade that was reported in Libya by the IOM.

Syreeta Greene, director of Equity, Inclusion, and Multicultural Affairs said the purpose of this presentation was to inform the students what is going on as it relates to Libya in the slave trade. 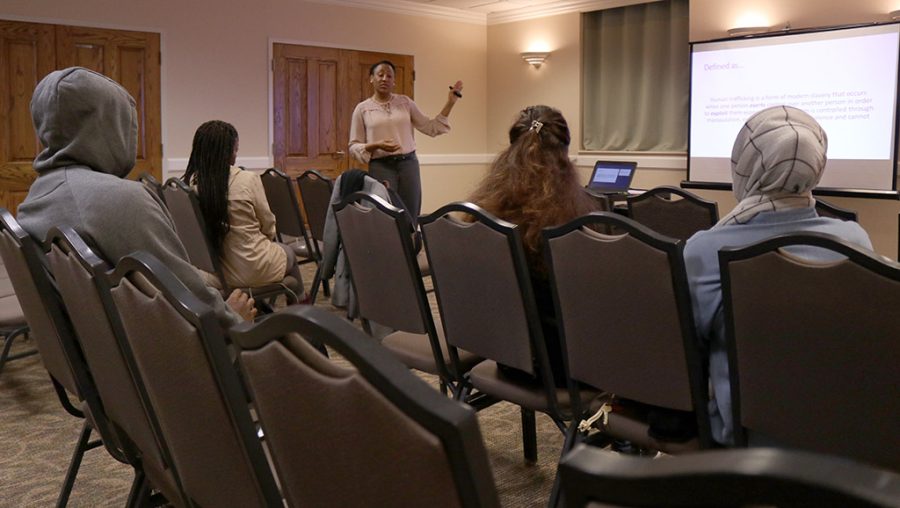 Francisco Martinez A total of four students Dierrica Smith, mass communication senior, Edozie Agbunnorh, nursing freshman, Nissa Khan, psychology sophomore, and Asma Mohammed, radiology sophomore, attend Syreeta Greene, director of equity, inclusion, and multicultural affairs, event, “Slavery in Libya and Beyond,” at Kiowa suite in the Clark Student Center. Where students could gather to speak on how everyday actions and consumer purchases support slavery, and how we can help put a stop to the practice. Monday, Feb. 5, 2018. Photo by Francisco Martinez

“I also wanted to introduce them to the concept and the idea of modern-day slavery,” Greene said. “And that it has been happening due to our consumer choices support it in various ways.”

Kelsey Purcell, mass communication senior, said that she was saddened by the fact that slavery is still an issue in our world.

“Every person should have a right to freedom and to life,” Purcell said. “And to know some people are still being treated as property is sickening.”

Greene said this slave trade in Libya is caused by the migrant crisis where many migrants, asylum seekers and refugees from Sub-Saharan, Africa go through Libya and the Mediterranean Sea to settle in Europe.

“Libya is a country in Northern Africa that borders the Mediterranean Sea, which is a route to Europe,” Greene said. “There are a number of migrants and refugees from many African countries that travel through Libya to get to Europe for opportunities and for safety.”

Greene also said the European Union trying to deny entry to Europe is leaving many of these migrants stuck in Libya where they become more vulnerable to exploitation and modern-day slavery.

“The Italian government and other European countries are trying to cure the number of migrants and refugees that are trying to enter their countries,” Greene said. “There’s been a blockade and people are being stuck and are being held in detention centers. You have smugglers and traffickers who are taking advantage of individuals and families who are trying to make a better life for themselves.”

According to Greene, the mainstream media is not focusing enough on international affairs, especially in Africa, which is one of the main reasons why people are unaware of what is happening in Libya.

“I don’t really follow mainstream media,” Greene said. “There has been a trend in our popular media to not cover international issues, particularly those in Africa.” 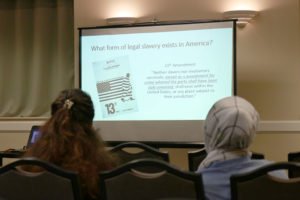 Nissa Khan, psychology sophomore, and Asma Mohammed, radiology sophomore, listen to Syreeta Greene, director of Equity, Inclusion, and Multicultural Affairs, speak on how slavery has taken a twist from your average textbook definition during “Slavery in Libya and Beyond,” at Kiowa suite in the Clark Student Center. Students gather to speak on how everyday actions and consumer purchases support slavery, and how we can help put a stop to the practice. Monday, Feb. 5, 2018. Photo by Francisco Martinez

Purcell said that the lack of awareness is due to people not being able to empathize with those in modern-day slavery.

“Sometimes people are in denial of the cruelty of this world,” Purcell said. “We saw this during World War II when millions of Jews were treated like animals and executed in mass, and so many stood by and ignored the horrors.”

Greene said one way students can fight modern-day slavery is by raising awareness.

Conney Vargas, mass communication senior, said hearing about the slave trade in Libya reminded her of the times where slavery was legal in the United States.

“It took me back to memories about the time when we had slavery here in the states,” Vargas said. “It made me think that instead of progressing, the world has stepped back.”

Contrary to popular belief, Greene said that the slavery is still legal in the United States. Those incarcerated are exempt from the 13th Amendment of the US Constitution.

“Our prison system is a form of slavery,” Greene said. “You can’t have involuntary servitude except for if you are convicted of a crime and are sent to prison. Technically, slavery still exists in the United States.”

Vargas said that her buying habits are a contribution to labor exploitation and modern-day slavery. She also said that making drastic changes can be very hard for many people.

“I own an iPhone and I know a lot of the companies that create iPhones are in China,” Vargas said. “I know that the phones aren’t made under the best circumstances, but at the end of the day, I still need a phone.”

According to Greene, the rise of free trade has contributed to labor exploitation and modern-day slavery. Greene said that many multinational corporations operate in countries without labor laws to make the most profits that they can.

“Free trade agreements allow companies to set up manufacturing centers around the world and in countries without proper labor laws,” Greene said. “They can certainly exploit and it can border-line, if not include, some forms of slavery where workers cannot leave and work unreasonable hours.”

“When we have less of a consumer demand for products that we don’t really need,” Greene said. “We must focus our attention to products that we need and shop at small businesses and promote fair trade.”

Asma Mohammed, radiology sophomore, said this presentation made her more aware of why it is important to know how she is financially supporting modern-day slavery.

“I didn’t realize how much of my money goes towards supporting modern-day slavery,” Mohammed said. “Now I will pay more attention to where my money goes. I will now shop more locally.”

Vargas said that she has learned how important it is for her to be informed about international affairs. She also said that she will not shop for diamonds.

“I’m not a part of a movement, but I like to keep myself informed,” Vargas said. “I also like to inform other people around me. I’m against the blood diamond industry. A lot of people think it’s completely gone, but it’s not true. That’s why I don’t shop for diamonds.”

Greene said the presentation was very successful because it raised awareness about modern-day slavery.

“Those that attended the presentation received information they were not aware of,” Greene said. “Hopefully that made an impact.”

Mohammed said she has learned a lot from this presentation, despite believing that she was well-informed on modern-day slavery.

“I’ve learned so much,” Mohammed said. “I thought that I knew a lot about this stuff, but Dr. Greene opened my eyes to a bunch of things that I was unaware of.”

Purcell said enslaving another human being is the worst thing one can do to someone.

“Slavery is an ugly, disgusting, vile thing that should make all of humanity question how we allow something like this to happen,” Purcell said.