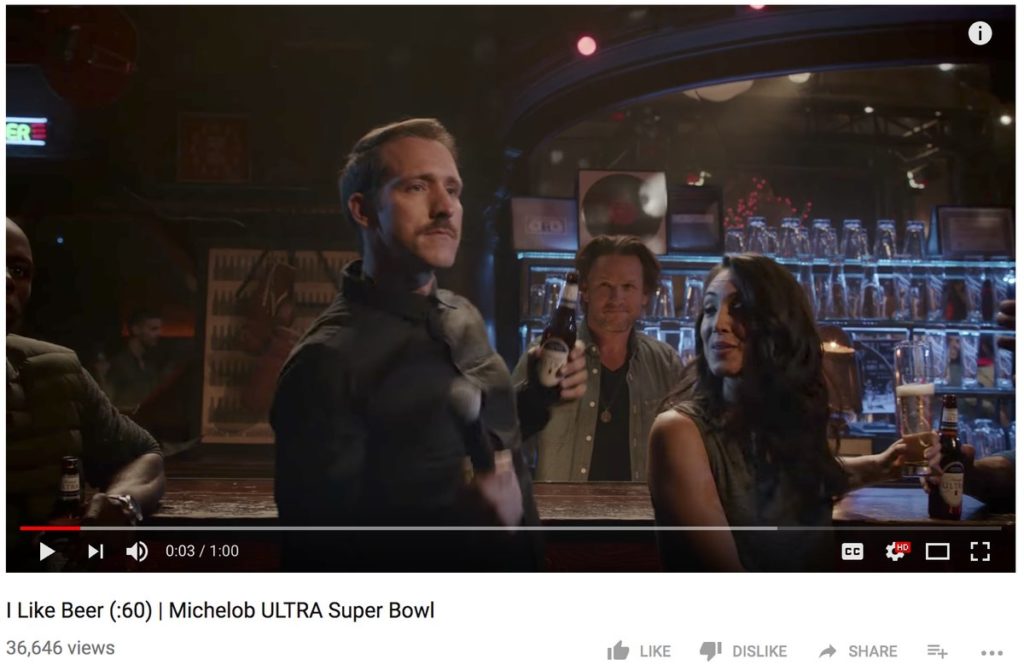 He said he got his practice singing karaoke for hours on end at Toby’s Bar, now Mustangs Bar, on Midwestern Parkway in Wichita Falls back in the 1990s and early 2000s. From Creep by Radiohead to New York New York by Frank Sinatra, he cut loose and sang the songs loud for the 50 or so people in the local bar to hear.

This Super Bowl Sunday, however, millions will tune in to hear it.

The advertisement stars Carey, alongside A-list celebrities like Chris Pratt in a bar scene where Carey’s character belts out the Tommy T. Hill classic “I Like Beer.”

According to Carey, acting compiles genuine experiences and passions to connect audiences with acting material. Carey said auditions always come down to 50/50 shots, and this time, he hit right on the mark.

“It’s finally nice to do something that will get some notoriety for the years of insanity,” Carey said. “Acting is not for the faint of heart. For every commercial you land, there is probably 200 auditions, callbacks and avails, but you have to see getting that shot as an acknowledgment that you were right for that part, that it means you were in the right place.”

When Carey was a student, Elizabeth Lewandowski, theater department chair and professor, said Carey maintained “a lot of energy on stage and was intense” with his acting.

“It was clear that he was very talented,” Lewandowski said. “I have been showing everybody the add because I’m just so proud of Tommy. He told me just ‘Tell all your students not to give up. I’m 40, and just made it.’ He was really committed to making it, and it is a long, hard haul. You have to have a very special type of personality to be a professional actor.”

Through that intensity and passion, Carey said he hopes his attitude is “infectious” to those around him because passion drives success.

“I bring a lot of passion to what I do, and I’d like to think that it is infectious,” Carey said. “I try to foster enthusiasm with whoever I’m working with because at the end of the day when you are doing a play, you’re playing. It’s a game. It’s something that’s meant to get your blood pumping and sweat dripping and catch goosebumps.”

Through that degree of engagement in creative projects, Lewandowski said finding purpose is found through “encouraging the next generation, and the generation after that.”

“You get to a certain point in your life where you realize you wont be at this for ever, and so we teach to help students achieve who they want to be,” Lewandowski said. “While not all students will go into theater directly, the skill set they learned here can be used as a valuable tool. We want to teach and nurture that passion students bring here.”

According to Carey, teachers encouraged him to plan and organize his time so that he learned accountability for his actions and goals in life. As an actor, Carey said people are “much more interesting if you are suffering because no one wants to watch actors that only rubbed elbows with rich people.” If that it what actors reflect into the world, Carey said not only are they not very interesting people, but they are neglecting what it means to be human, to have fun with the experiences.

“The name of the game is perseverance at the end of the say. At a certain point, nobody is going to believe in you, and you are going to be the only one who’s going to do it,” Carey said. “There’s a lot of humility in keeping to your roots. You need humility to be successful.”

With millions of eyes tuned in to watch the Super Bowl, Carey said everyone in the commercials, in the stands or on the field all have one goal in their minds.

“You do whatever you can to get there, to make an impact,” Carey said. “I hope that I can inspire that in people.”