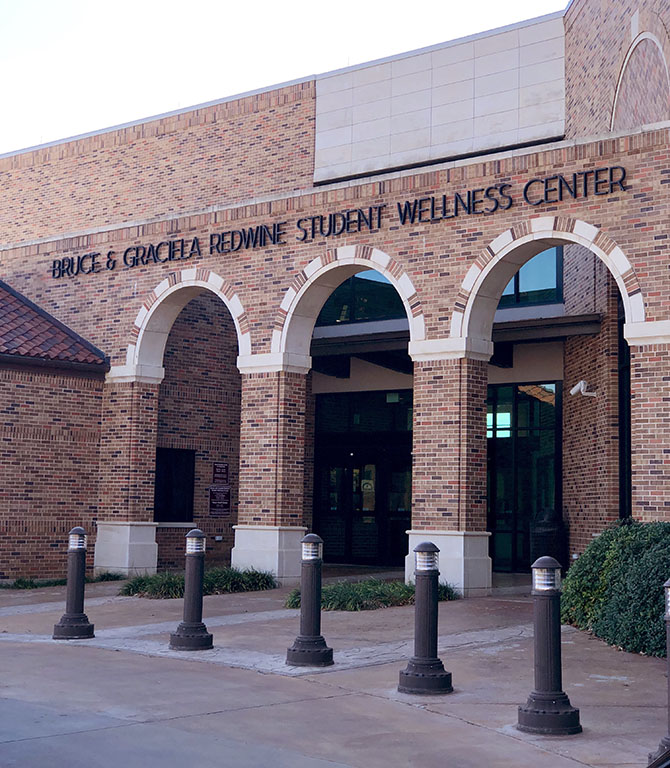 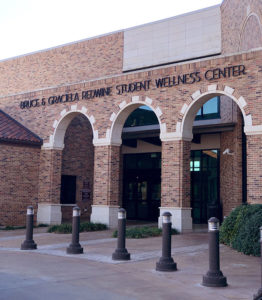 “I oversee basically anything that goes into the Wellness Center,” Reay said. “We help with anything health and wellness outside of giving people shots.”

“When I came over here I had actually been working for the Wellness Center, teaching group fitness classes and helping out the former director with programming and things like that,” Reay said. “So it was a pretty natural transition.”‘

Richardson joined the university after graduating from Hardin Simmons University where he played baseball. He said he did not get partake in many intramural sport opportunities due to his obligation to the baseball team, but he has been involved in intramural sports since attending his first years of college at the University of Arkansas. He said he assists Reay, and he directly oversees the intramural program, seven intramural staff members, and scheduling.

“It is a lot of hours, but I wouldn’t change it for anything,” Richardson said.

Richardson said his main goal is to grow the intramural program as much as he can.

“We have already done so through great staffing, marketing, and student involvement,” Richardson said. “That was the big thing I told myself before even coming in and sitting down at a desk. After being here for a little over three months now, my goals have expanded & multiplied, but the initial outlook has always remained the same.”

Richardson said the student workers have helped him understand the ways of the Wellness Center. He finds it important to familiarize himself with the culture of the university.

“Obviously adjusting and adapting to Midwestern has been my goal,” Richardson said. “I want to get to know more of the wellness center day in and day out things, because I came from a school where I did a big internship with our intramural program, and that is where most of my knowledge has come from.”

Richardson said, “My goal now is to see what Angie sees and gain as much knowledge as possible.”

“I wouldn’t necessarily call them struggles,” Reay said. “I would just say this position has been a huge learning curve. In my eight months in the position, I have learned about the facility, staff, expectations from my supervisor, and how we can incorporate more wellness opportunities for the campus.”

Reay said she enjoys her position and the extra time that it offers her to implement new ideas and programs.

“It is such a culture change from working in housing when there was always something going on,” Reay said. “Here we have things going on through the nights with intramural sports and everything, but it has definitely been a change of pace that I am not used to. I am actually able to start new things. That is how I was able to start the personal training program. We offer more group fitness classes now. With our employee health committee, I was able to do things that hadn’t been done in the past. We had a huge brown bag series. We had a stress free week, a wellness week, and we have the fall kickoff.”

Richardson said students can expect more of these fun educational programs to take place in the spring. One event will be a “World of Sports Week.”

Richardson said “I would like to see more campus outreach on our end to student organizations, residence life, and anyone that would like wellness programming in their areas.”

“A specific goal of mine is to reach out to different student populations and organizations as we implement new events and recreational activities,” Richardson said. “Growing the amount of people that become involved within our programs will always be a reoccurring goal.  Specifically, next semester’s focus will be incorporating cultural diversity that is already embedded in certain activities and sports we have previously planned.”

Richardson said he plans to host one day tournaments where a more diverse range of sports are offered for students who may not be interested in basketball, slow pitch softball, or football.

“We just have such great facilities, it’s like ‘why not?’, Richardson said.

Madison Scogin, composite science senior, has participated in intramural sports every year. She said Richardson is easy to contact and quick at responding to emails with useful information.

“Intramural sports compared to last year, are so much more organized,” Scogin said. “The communication between Mike and the students is 100 percent better. He returns emails quickly, contacts students with the right answer.

Scogin said she understands the importance of good communication.

“Being someone in charge of campus activities for my sorority, that is super important,” Scogin said. “You want to have answers fast. He actually cares about the students and wants to see them be successful.”

Scogin said she has friends that have never played intramural sports, but she thinks they would be interested based on the changes that Richardson is planning to make.

“All of the sports that I like to play are the ones we have, but I know two of my friends that work with me in admissions from Zimbabwe were saying they would like to see rugby offered as a sport,” Scogin said. “One of those friends also works at the wellness center, and he said he talked to Mike about adding those things. That is important because the sports we have here may not be the ones offered in other countries.”

Number of teams that participated in all recreational sports combined:

Number of participants throughout all recreational sports combined: