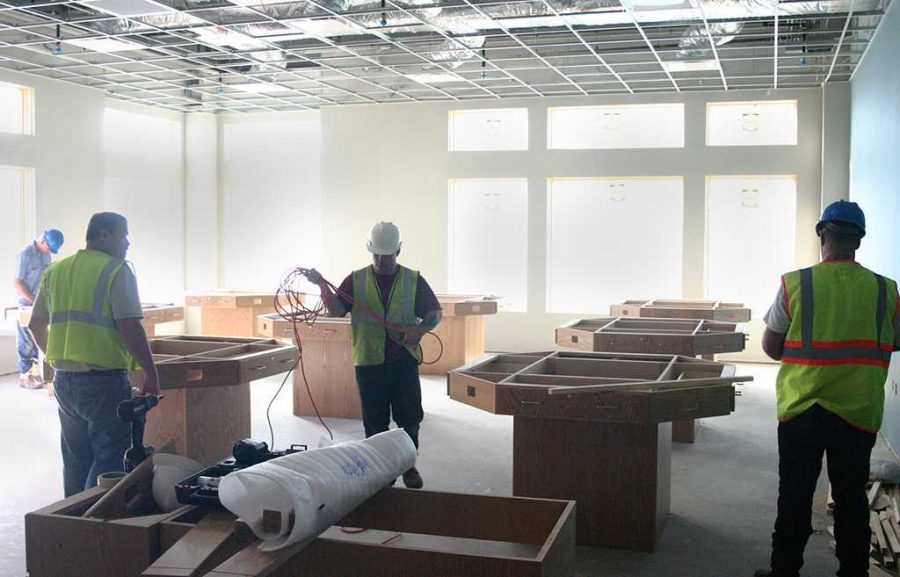 Construction workers build tables for the new Flower Mound campus which should be ready to open for the spring semester. The Board of Regents are expecting a slew of nontraditional students to enroll. Photo by Tré Jones

A brand-new MSU campus, located in Flower Mound, Texas, is set to be opened to the public on Jan. 16, 2018 — just in time for the spring semester.

Randy Canivel, who has been with the university for a little more than 10 years, was hired in August 2017 to be the director of the new facility. He said he is looking forward to this new building being finished for students to attend.

“One of the most important things about this new campus is branding and expanding MSU’s mission and power beyond Wichita Falls, and that will result in more students,” Canivel said.

This campus was first proposed to the Board of Regents about two and a half years ago, but as far as groundbreaking goes, that all began in December 2016. Canivel said they were hoping to have the facility opened in the fall of 2017, but because of weather and other things going on, they weren’t able to open it. This did not affect programs since most of them are online.

MSU Flower Mound will be partnering with North Central Texas College, meaning students that go to NCTC will be able to take courses at MSU as well. On campus, there are different rooms that will be specifically for NCTC students. Canivel said financial aid will be a smooth process for those that choose to attend both MSU and NCTC at the same time.

“All of the services will go through Midwestern, but we have an employee that will help students with that, so they will not have to bounce,” Canivel said.

At the May Board of Regents meeting, the regents decided the university will offer the health science degree completion programs, such as nursing, respiratory care and radiologic sciences, in an accelerated parts-of-term format. This model allows a student to complete nine semester credit hours per term while only being enrolled in six semester credit hours at any given time.

The Flower Mound facility will mainly have a larger number of non-traditional students who fall over the age of 25, which is different than the Wichita Falls campus.

“We are focusing on adult learners here. MSU in Wichita [Falls] is more traditional, so here we are focusing on adult learners that are between the ages of 25 and maybe 34. We are offering the three health science completion courses and the radiology program. We have education one as well, and we are hopefully looking to expanding more as enrollment grows,” Canivel said.

The majority of these classes will be online with instructors present. There will also be internet television classes that are broadcasted from different places. Canivel said they will have the capability to be able to do things such as the ITV classes.

“We have the ability to do simulcasting or broadcasting to different campuses along with the NCTC classes that will be going on as well,” Canivel said.

He also said this sort of thing will symbolize the partnership between the two schools by having this shared facility, which he enjoys.

With the budget being based on an estimated enrollment of 6,150 students for fall 2017, the overall budget for the Flower Mound campus totaled to about $1.14 million. Keith Lamb, vice president of student affairs and enrollment management, said enrollment was important for this facility to be successful and it will help overall enrollment numbers for the university together.

“We don’t want to shift our population from Wichita Falls to Flower Mound. The purpose of this new campus is to grow our population,” Lamb said.

Lamb said the education program starting in Flower Mound will hopefully be an attraction to people who live in the Dallas/Fort Worth area.

“This spring looks like we will offer our first education EC [early childhood] through six [6th grade] cohort, and we believe that will be attractive to a number of school districts that we are visiting with that are interested,” Lamb said.

With enrollment playing a big part in the making of this campus, Canivel said location is key in all of this. With the facility built in a largely populated area, it will be easier to gain more students and he said he and Lamb are excited to get everything started.

Lamb said, “Right now, enrollment is looking pretty good. We are hoping to have around 2,000 students hopefully by the time everything gets started.”

With MSU and NCTC classes being taught, there will not be really any instructors leaving this campus to go to Flower Mound.

Canivel said the building of this campus has been good for him, but it was certainly a heavy workload.

“It has been a lot of marketing and a lot of networking along with construction. It’s been great experience because it’s MSU and I love MSU. It’s great just meeting all these people in Denton County, and it’s going to be a great partnership with the city,” Canivel said. “Getting to know the people at North Central Texas College has been great as well. Construction has been its own animal, but that has been a great learning experience. We also have a great person in charge of the architect process, and I have enjoyed that.”

Canivel said he had two main challenges during this process: branding and construction.

“I love marketing. I love branding and promotions, but people don’t know our brand unless they have some sort of connection to Midwestern State, so the challenge has been telling people what we are all about, our benefits and our advantages to going to MSU, but overall people have been receptive, and they are excited that we are here. The second challenge would be construction. There’s always going to be a challenge there, but I have a great group of people to help. The construction can be difficult because there are just so many moving pieces,” Canivel said.

Anticipation is one word Canivel would use to describe his feelings about the new building.

“A lot of people are excited about what is coming because there will be place the community can see that is just not another school. I want to use the ‘Make it Your University’ tagline for here. I want the community to feel like this belongs to them, and I believe they are very excited about that,” Canivel said.

Advertising has been a big deal for both Lamb and Canivel. With Flower Mound being such a busy area of the state, it was easy to have advertising available about not only the Flower Mound campus, but the entire university as well.

Lamb said, “We have started direct mailing over 150,000 people that lived in a 15-mile radius of the school being built that had some college, but no bachelor’s degree. They all got multiple mailings form Midwestern. Recently, we have started doing targeting mailings about some of our programs.”

Lamb said there will be chances to have different events at the new campus, such as functions for prospective students and alumni events.

“There are a lot of ways that we can leverage this facility to more deeply integrate ourselves in the Dallas and Fort Worth areas, which will see huge population over the next two decades,” Lamb said.