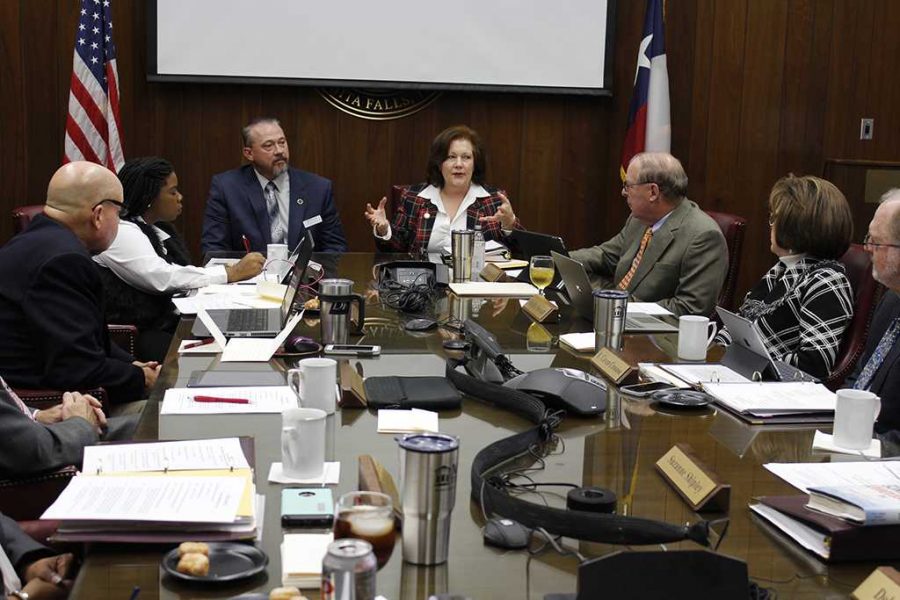 Marilyn Fowle talks and expresses how financial policies are working to the Board at the Nov. 10, 2017 meeting.

Kristen Garrison, associate vice president of undergraduate education and assessment, said the change came from the work of the financial aid and admissions task force who researched the admission requirements of  peer institutions in Texas.

“The policy change is the result of the work of the financial aid and admissions task force, which researched the admission requirements of other Texas colleges and universities, as well as the retention and performance of current MSU students who graduated in the top 25 percent,” Garrison said.

Garrison who presented the information in the Nov. 9 board meeting said the change in the admissions policy is a positive move for the university.

“This is a positive move for our university, as it conveys our commitment to students who have demonstrated a solid academic record,” Garrison said.

Director of Admissions Gayonne Beavers said the change in the admissions policy would put the university in line with other universities in the state.

“It will just put us in line with what a lot of universities in the rest of Texas are already doing. Many of them, for many years now, have been auto admitting the top 25 percent, whereas MSU has just stayed with admitting the minimum that the state allows of the top 10 percent. This would just put us in line with a lot of other universities in the state and with a majority of our competitors,” Beavers said.

According to Keith Lamb, vice president of students affairs and enrollment management, the financial aid and admissions task force studied aspects related to how students are admitted. Lamb said they discovered the top 25 percent of students retain well, much more so than the overall freshmen class.

“The recommendation to change the policy came from the Financial Aid and Admissions Task Force. That group studied a number of things related to our admissions, such as who we’re admitting and how we are admitting students. One of the things that they discovered is that our published admissions criteria for the top 25 was very rigorous compared to peer institutions. They also noticed that in general the top 25 percent of students retain very well at Midwestern, much more so than our overall freshman class,” Lamb said.

1) By automatically accepting the top 25 percent, the work would be much easier for the processing staff

Lamb further expressed the concern of limiting the applicant pool from those in the top 25 percent.

“There was some concern that we are limiting our applicant pool from the top 25 percent, because so many schools automatically admit the top 25 percent that when they see that we do not automatically do so, the students may be less inclined to apply to Midwestern and more inclined to apply to the schools where automatic admission is offered. There was a general feeling among members of the committee that we are potentially missing out on some well-qualified students that aren’t applying here because of the stated standards, and I think they are right.”

When it comes to high schools where the weighted GPA is more than 4.0, Beavers said the GPA is unweighted and converted to what it would be on a 4.0 scale so the data would look the same across the board, then a decision is made to automatically accept these students.

“We un-weight the GPA so if they have above a 4.0 that means there’s a weighted GPA somewhere in there somehow and so we un-weight and compare it to what it would be on a 4.0 scale, so that across the board we’re looking at the same data. Then at that point we make a decision,” Beavers said.

According to Beavers, the change will help to market to more students so they will consider the university in the future.

“The change will help us to market to more students so they will consider us in the future. Whenever you look at a lot of the universities that accept the top 25 percent already, many of those universities accept the same caliber of students and, in some cases, accept a higher caliber of students than what we already do here. It will just help us to become more competitive with those students that we want to come here,” Beavers said.

Beavers said that if the university wants to grow in the future then they have to market themselves and compete with those already there.

“Because as we are wanting to grow in the future, we have to adjust ourselves and put ourselves in the market to where we can compete with those that are already there. So by us shifting to auto admitting the top 25 percent, I don’t think it will necessarily change the caliber of students per say, but it will allow more students to consider us as a university moving forward because they’ll know that it’s a university they can be accepted to.”

“If our goal is to grow and if we are looking at a Texas population that is demographically going to increase in first generation, and things like that, the question isn’t how we’re going to bring in students with higher qualifications because they’re not out there, the question is how are we supporting the ones that we are bringing in and how are we transitioning them to be successful,” Lamb said.