Music students prepare for regional competition with recital at Akin 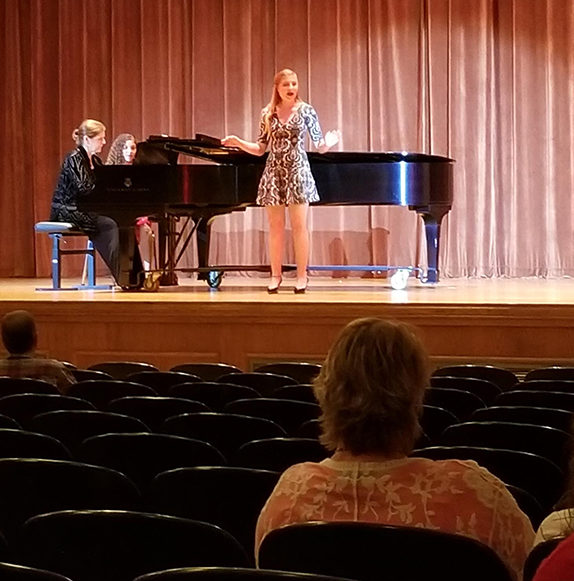 Akin Auditorium was silent, save for the voices of the five sopranos. All 23 pairs of eyes and ears trained on the performers at the National Association of Teachers of Singing student recital Nov. 5 at 3 p.m.

To prepare for the 67th Texoma NATS Regional Conference and Student Auditions to be held on Nov. 8 at Texas A&M Commerce which hundreds of colleges across Texas, Oklahoma and Texas will participate in the contest, the recital showcased a few of the students that will audition.

“We are competing against the biggest schools in the three-state area, schools that are well known like the University of North Texas, Baylor and Oklahoma City University,” Don Maxwell, professor of voice, said. “There’s no class one or class two, so every opportunity they get to perform, we figure out what we need to go do next and go on from that point. Every time you go out on stage, it’s one more step.”

Each soloist sang three songs, accompanied by pianist Sandra Cunningham. The songs were of English, Spanish, Italian, German and French origin and were picked for the students by the vocal coaches.

“You can have one English piece, but you have to have two other foreign language pieces,” Emory Arnold, music education sophomore, said. “It’s really helpful to have someone pick because sometimes you might not understand what sounds good for your voice, so it helps you branch out.”

In preparation for the recital and the competition, Chloe Dunlap, music education freshman, said they had a lot of practice so far because there are various languages to go over.

According to Maxwell, he believed that the recital helped the students in preparing for the competition because singers “never know the difference they can’t hear.”

“They know whether it’s comfortable or whether they missed a note or it’s off, but all I’m looking for is where are we going and what do we need to do next,” Maxwell said. “They don’t really know where they are going. They know it gets easier to sing and they can sing lower notes and higher notes.”

“It helped us get over nerves and helped show what we needed to work on,” Arnold said. “My expectation is to do my best and have fun.”