Girls choose their sorority based on fit, regardless of skin tone 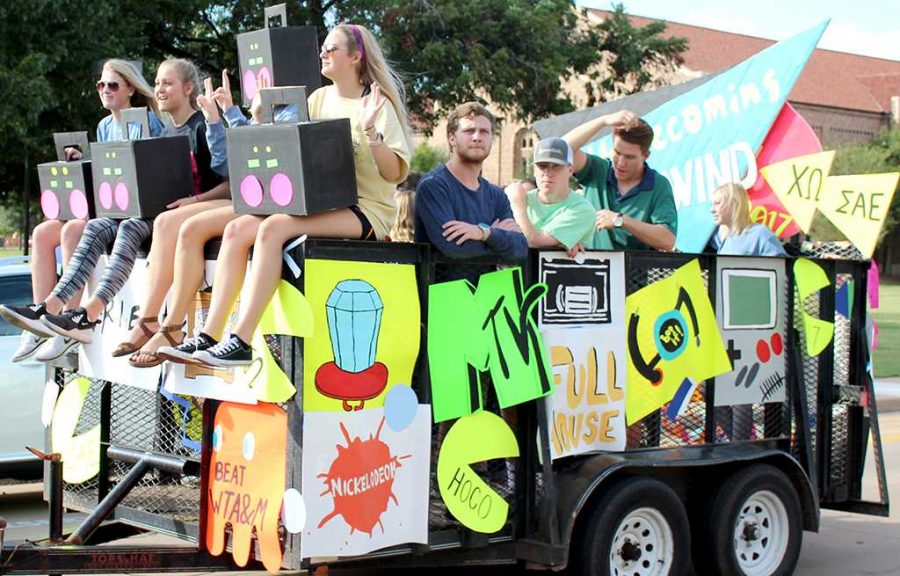 Chi Omega and Sigma Alpha Epsilon members rock to music with their boom box heads riding on their neon covered float for the Homecoming Parade.

Eighty beautiful girls, all with different skin tones, curled and straightened hair, perfect makeup and shiny eyeshadow, freshly-painted nails, distinctly matched outfits and the smell of 80 different perfumes overwhelm and intimidate the first day of rush and recruitment for both Panhellenic and multicultural sororities.

Sorority life on this campus consists of four Panhellenic sororities and four multicultural sororities. All eight sororities look for different qualities and values in women and go through the recruitment process a little differently.

“The multicultural and Panhellenic sororities recruit their girls at different times in the year. Panhellenic recruitment targets a majority of freshman in the fall semester and multicultural intake targets second semester students in the spring,” Greek adviser Mario Ramirez said.

“One reason why girls choose to rush Panhellenic versus multicultural is that the Panhellenic sororities have been on campus longer than the multicultural ones, and that is what most girls know,” Ramirez said.

“A reason why more girls choose to go Panhellenic versus multicultural is because they are eager to join a sorority once they get to campus,” Sigma Lambda Alpha President Cynthia Hubbard said.

The multicultural sororities recruit girls in their second year and up.

“Twenty-four semester hours are required for a female who is applying for multicultural sorority recruitment. The sororities want to recruit girls who have a year of college under their belt and already know the ropes of college,” Ramirez said.

The ultimate goal when choosing a sorority is to find the best fit among a group of girls with similar values.

Jazmyn Sterry, education junior, is biracial and a member of one of the predominately white sororities on campus, Sigma Kappa.

“I always saw myself in a Panhellenic sorority” Sterry said. “I may be biracial, but I grew up in an all-white home. I was just raised around a different culture than what my skin tone would lead people to believe. I don’t think I would have fit in with the girls in a multicultural sorority.”

Girls are recruited based on whether or not they fit the sorority’s core values.

“In Sigma Kappa, our four core values are personal growth, service, friendships and loyalty. We look to recruit the most diverse girls who have the same core values,” Sigma Kappa Vice President Jessica Wollenberger said.

Each sorority has different core values that they stand by and look for in the girls they recruit. It’s all about finding the right fit and being comfortable with the decision.

Psychology junior Jazmine Brown came to MSU in 2014 hoping to join Delta Sigma Theta, but at the time, the sorority wasn’t active on campus. The sorority was re-established on campus in 2016, and Brown became vice president a year later.

“I did my research on the different sororities before coming to college and I had my heart set on Delta Sigma Theta. I knew it was going to be a good fit for me so when there wasn’t a chapter on campus I did what I could to help start one,” Brown said. “I didn’t want to go panhellenic because that’s not really my personality and I grew up hearing about the African American sororities in my family.”

Choosing between a Panhellenic sorority and a multicultural one depends on how each girl was raised and where they feel the most comfortable.

“Girls pick their sororities based on the culture they were raised in, where they are around other girls that look like them and where they are most comfortable. It’s about finding a home,” Ramirez said.

In the previous version of the article, we did not clearly state that the first multicultural sorority was established at Midwestern State University in 1994. It was unclear whether we meant established on campus or first founded. We also misidentified the year Delta Sigma Theta was re-established on campus, and by whom. We apologize for the issues as we strive to be as accurate and fair as possible.

After this story was published, there were two sources that said they were misquoted. After meeting with the reporter and reviewing the interview data, we stand by our reporter and the story she wrote with the quotes she chose to put in the story.