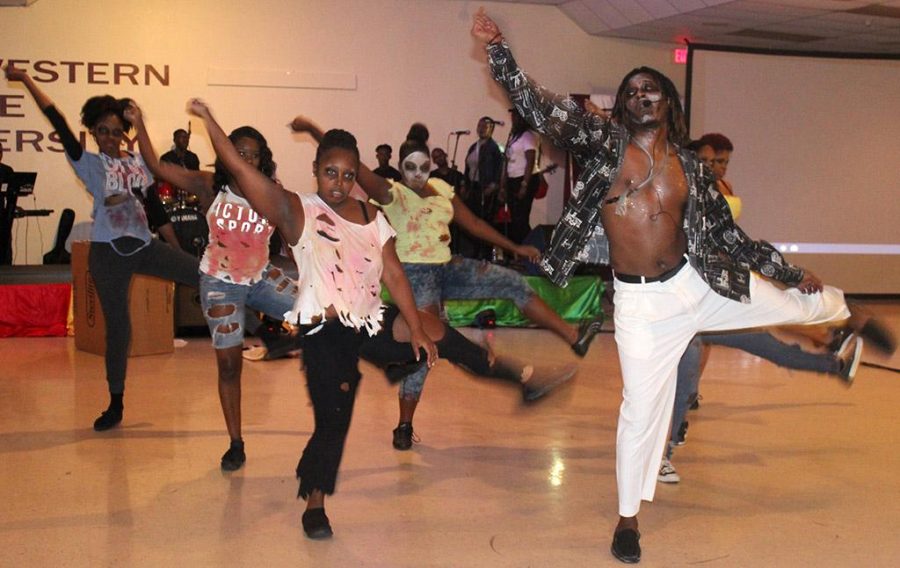 The group O.K turns zombie as they dance to the song Carnival Jumbie for the 2017 Caribfest Soca Show hosted in the Sikes Lake Center on Sept. 29. Photo by Marissa Daley

Nice jazzy music played by Electric Roots, and colorful lights flashed as about 70 people flooded through the doors to watch the five groups fight for the title of Soca Show winner.

The show officially began at 8 p.m. Friday night with the introduction of the show host and the three judges. Then the five contestants began their battle for first place. We started off with a rap duo called Jel & Powa, following them was the winners of the night — Spice and Ice.

They started their performance of the song No Bad Vybz with a two-minute video skit with two friends bickering back and forth about negativity and not having to follow what everyone else around them is doing. The writers of the song, accounting and finance senior Kornika Degannes and special education senior Jorrey Martin, wrote their song in June just sitting around goofing off.

Degannes said, “We wrote the song together in June, just sitting together on my couch just fooling around when we wrote it.”

They took a long time to get to the actual practicing starting only three weeks before the Soca Show.

Martin said, “We started practicing about three weeks ago with the actual band and everyone else [the dancers].”

Spice and Ice had a message they wanted to tell everyone — they didn’t have to be like everyone else and that being negative was never the answer, hence the song title No Bad Vybz.

Degannes said, “We just wanted a message to be sent out there, to be positive and do what’s best not necessarily what everyone else is doing. Not what the world is doing but doing what is right.”

The judges liked their performance enough that Spice and Ice bagged first place. The criteria for judging were melody, lyrics, originality of the presentation, crowd response, props and talent. Judge Wayne Toulon is an accountant for Wichita Falls Independent School District and alumnus of the Caribbean Students Organization.

Toulon said, “As a judge, I was really impartial. I just judged based on the performances overall. The actual winners put on the best show in terms of all the areas that we were judging. It was a pretty close but we [the judges], thought they did the best job.”

Toulon was impressed with the show as a whole though.

Toulon said, “Every year the show gets better, I must say that it is pretty nice to see the Caribbean people developing their talent and showing them off to the community. I hope that next year it will be bigger and better and that we will have more people from the Wichita Falls community coming to support the show.”