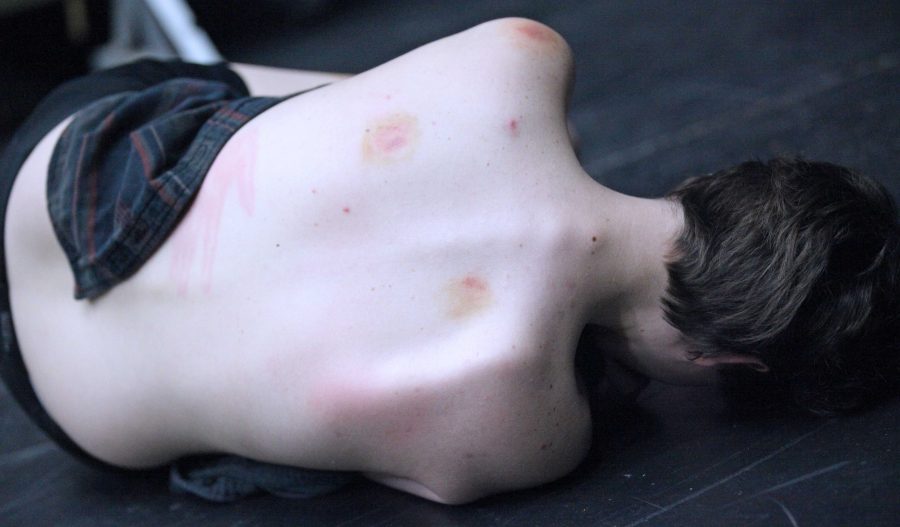 Most traffickers have between three and five victims working to exchange sex acts or anything of value. The Trafficking Victims Protection Act of 2000 laid the foundation for sex trafficking legislation in the United States. Guerrilla Traffickers are violent pimps that severely harm victims. Photo illustration by Bridget Reilly

If she doesn’t earn him $1,000 tonight, she won’t get dinner. She has to turn at least two more “tricks,” or “daddy” won’t let her go to bed. She’s serviced three “Johns” already, but it’s still not enough to earn her time to sleep before she has to get back on the circuit  in “the Life.”

Every day, sex trafficking victims are forced to sell themselves for the profit of others. Their bodies. Their innocence. Their rights. All ripped away for a pretty penny.

Ninety-nine percent of people in human trafficking never get out. The average age of entry point into sex trafficking is between 12-16 in the United States. Texas is home to three major trafficking cities. If they don’t escape “the Life,” most victims only survive seven years because murder, suicide, sexually transmitted diseases, etc. are common in the Life.

Sex trafficking is here in Wichita Falls, and has been for a while, but as society turns a blind eye to the horrific nature of this crime, pimps have taken advantage of the public reluctance to address the issue.

“We don’t have to go looking for the girls anymore,” one pimp said in a Traffic911 trafficking awareness video. “Society and social media is doing it for us.”

Human trafficking bares two frightening faces: labor and sex. While human trafficking is the fastest growing crime the world faces, it remains below the surface, hidden beneath the ignorance of those who think it happens only outside U.S. borders. Sex trafficking is a foreign topic to people, and yet the impact is detrimental to human life.

“People say they understand sex trafficking because they saw Taken once, and I’ll just look at them and nod because that’s cool and all, but that creates the illusion that sex trafficking isn’t here in the U. S. and that’s not true,” Speed said.

The two-hour seminar offered credential certification for members in various professions like teachers, counselors and police officers, but more than anything, helped equip everyday citizens with knowledge to prevent sex trafficking.

“This was the fourth year for us to bring them out,” Lisa Choate, director of the Teens Emergency Shelter in Wichita Falls, said. “We often have local speakers talk at different events, but getting to bring in specialists that handle these topics every single day can be more impactful for people. It became apparent that this was a topic that was being missed in trainings offered, and it’s a problem that is growing in mad proportions.”

Choate said the graphic content is a “fantastic opportunity” for the students that interact with these situations, but also said the exponential growth of the crime rate should attract everyone because the topics aren’t covered as extensively in classes although the materially is applicable to everyone. The amount of information and the seriousness of the statistics in the Wichita Falls community sparked the drive for Texoma Child Abuse Prevention members to focus on sex trafficking recruitment and prevention.

“They are traveling through our community, collecting people from our own community and they are trafficking through our community,” she said. “We’ve had a massive social pressure to reach those who aren’t in the normal Child Protective Service, counselor group. It’s something we need to get everyone to understand the seriousness of, and part of that is breaking down the idea that ‘it’s not here,’ or that ‘your’ children are safe.”

Cailli Perry, Kelsey Denne and Dianna Delgado, social work seniors, work at the Children’s Aid Society of West Texas through their internship, and volunteered with the Texoma Child Abuse Prevention projects to experience varieties of social work. United Way, Patsy’s House, Pathway Project, Rainbow House, Phased In and other community based organizations continue to attend conferences like Traffick911 to “pump as much information into the community as possible,” Denne said.

According to Denne, college and universities should offer class credit for attending seminars, and Perry said while administration can’t stop issues like assault from happening, awareness needs to be pushed so people know what to do and where to get help.

“They [Texoma Child Abuse Prevention] do more outreach projects than I originally thought, and everyone on the committee has roles in different agencies in the community. All come together to prevent and acknowledge the problems here,” Perry said. “I didn’t realize how big of an issue it was in Texas, let alone in Wichita Falls.”

While Speed said statistics on sex trafficking are often skewed, they are something to be aware of to focus on the intense need to protect the victims. According to the Dallas Morning News, a state-funded study estimated that the vast majority of young victims in Texas had some contact with Child Protective Services.

According to Speed, pimps manipulate basic desires to trap broken individuals. Through this, “it’s no accident” they often refer to themselves as “Sugar Daddies,” Speed said. Terms like “daddy,” “pimp” and “traffickers” are synonymous to someone forcing or coercing sexual acts in order to obtain something of value.

Traffickers not only approach victims in public places, but also through social media platforms, Speed said. They use any means to “provide” for a potential victim in order to lure them in.