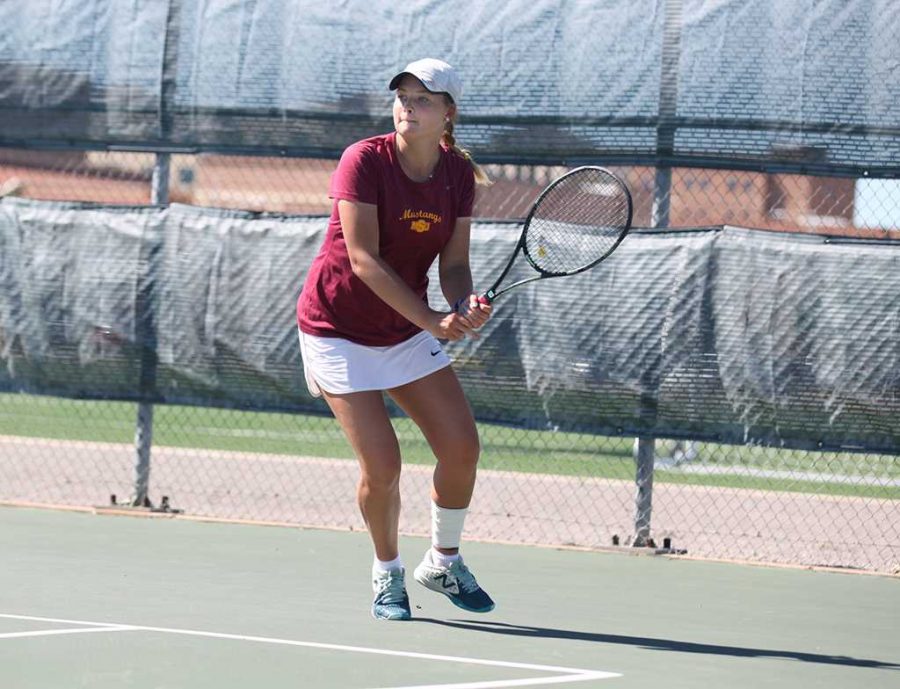 Bianca Duff, psychology freshman, prepares to swing at the ball during her tennis match against a Dallas Baptist University player on May 1. Photo by Arianna Davis

With a school record of 11-0 home victories in one season, being ranked 15th in the nation and 2nd in the region, the women’s tennis team will travel to Florida on May 10 against the No. 1 seed in the Atlantic Region. The team earned a ticket to the national stage by defeating Dallas Baptist on May 1. With a victory of 5-1 over DBU, MSU will be represented at the national competition for the fourth time in the last five years.

“Once all the girls had leads over DBU, and they were 5-1, the fact that we would have MSU represented at the national level seemed more and more real,” business management freshman Sebastian Venegas said.

After MSU established a 2-1 lead from the doubles competition, biology sophomore Maddy Coffman won her single against DBU’s Mikayla Rinker. Following with a victory over Cassidy Paul, marketing freshman Ashley Ramirez helped extend the lead to 4-1.

“It was such a good feeling to come back and win my double with Greta [Lazzarotto],” Ramirez said. “We had lost our match together last time, so it was pretty awesome to win today.”

“We are taking it game by game. We learn from our wins instead of our losses, and we are hoping that carries us to the best outcome possible,” Head Coach Scott Linn said.

“I hope that the girls are able to go all the way to the national championship, because they really are playing like champions,” McLaurin said.

While the women are traveling to Florida, the men ended their season with a loss to Cameron University in Lawton, Oklahoma on April 29.

“Even though we didn’t win against Cameron, we are excited for next season since we ended up conference runner-up this year and even though we’re losing a lot of seniors, next year should be a great year for us,” computer science junior Vasudev Vijayaraman said.

The men’s team was ranked 21st in the nation and third in the region.