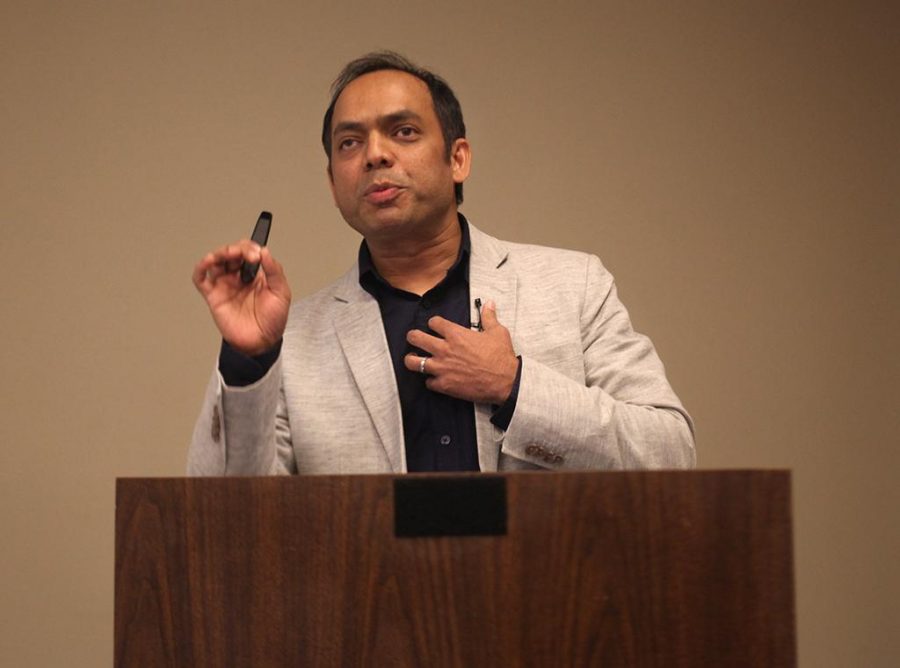 Rais Bhuiyan, victim of a Dallas shooting, makes appearance at Wichita Falls Museum of Art to speak on his survival and progress to forgiveness on April 18. Photo by Arianna Davis

“How would you react if you were shot in the face?”

Rais Bhuiyan, a 9/11 hate crime survivor, gave a talk on compassion, connection and community to a crowded room on April 18. As pictures of his survival after he was shot in the face point-blank were shown, the crowd collectively held their breaths. While the pictures and audio of his attacker moved members of the crowd to shake their heads and gasp, his speech was the most moving part and left a lasting impression.

The talk was a part of the 17th Annual Speakers and Issues Series, and the committee behind the series brought Bhuiyan to campus to talk about his survival, compassion, connection, community and the power that college students have to change the world and make more human connections.

Bhuiyan started his organization, “World Without Hate,” nine years after a white supremacist walked into a gas station in Dallas following the 9/11 attacks and shot Bhuiyan in the face. The attacker only watched as Bhuiyan screamed for help, and Bhuiyan soon realized he would have to fake his death or else his attacker would not leave. While the pain was unbearable and felt like, “a million bees were stinging my face,” Bhuiyan said, the aftermath was even worse. As he struggled with hospital bills, blindness in one eye, three dozen pieces of shrapnel still lodged in his face, and forgiving his attacker and would-be killer, Bhuiyan also found it hard to get back on his feet.

“Three minutes before my attack, I was perfectly happy. Three minutes later, my life as I knew it was ruined. As I finally was transported to the hospital and was about to lose consciousness, a graveyard appeared in my mind, directly following images of my family and then fiancé,” he said. “I lost my sense of security after the attack. But I did not give up my hope, my dreams or my faith. I never questioned God. Instead, I prayed for strength. I became stronger each and every day.”

Bhuiyan had come to America for the American dream, but soon found the American nightmare. His pain would not let him forgive shooter Mark Stroman for years, but when he did, he soon found another struggle in trying to save Stroman from his execution.

“I suffered but I did not find any relief in Mark suffering too. When I looked at him, I saw a human being. I saw him as a victim too,” Bhuiyan said. “I wanted to free him from his execution.”

But saving Stroman was a harder job than Bhuiyan expected. Not only was he denied seeing Stroman face-to-face several times, his case against the defense was tossed back and forth between courts with little to no avail. The day that Stroman was going to be executed, Bhuiyan was still denied a meeting. However, he was able to have one conversation with him through Stroman’s friend’s phone.

“I kept asking for a meeting, but they wouldn’t allow me. I told them it would allow me to close the hole in my heart, and they still said no. When I was able to talk to him over the phone, I told him, ‘I never hated you. I forgive you.’ And he said, ‘Thank you. I love you, brother,'” Bhuiyan said. “I couldn’t hold my tears. He told me he had to go, they were calling him, and I knew he was going to his execution. I only wish I had seen him in person before he died.”

Though Bhuiyan struggled with forgiveness, he said the struggle was something that has strengthened him. Quoting the likes of Ghandi, Bhuiyan said forgiveness is the action of the strong.

“I became a survivor. I was treated as a lesser person, I was targeted for my differences. But I learned to forgive, and forgiveness benefits everyone,” he said. “Mark came to know a little about me. He was stunned and touched by my efforts. He said, ‘I am more content now than I have ever been,’ and warned others to not become a Mark Stroman. He called for an end to hate.”

Bhuiyan and Stroman’s message stuck with students in the crowd, like nursing junior Rachal Denton and English sophomore Brittany Williams, who both found things to take away from the talk.

“I really liked his message. I’ve gone to events before where there were speakers who moved me, but none of those events were in the same category,” Denton said. “His speech had so much kindness and compassion and that was something that is sticking with me. Everyone should be treated with kindness.”

Williams’ favorite part of the message had to do with treating people as individuals and not as a group. Although she had not gone to one of the Speakers and Issues events before, she said she was interested in attending another.

“I would definitely go to another event. This was one of the better events that I’ve been to on campus and that was due largely to his message. One of the things that got to me was that he said to treat people as individuals,” she said. “Another thing that surprised me was that it happened in Dallas, which is really close. Sometimes you don’t think much about horrific events if they don’t happen close to you.”

Bhuiyan said hate crimes can happen anywhere, anytime, because there are extremists in every religion. However, he said there are ways to combat hate crimes and spread more understanding.

“There are extremists in every religion due to ignorance and hate. If you spew hate and fear, that doesn’t help. We need to make more human connections, we need to be more active in communities,” he said. “I wanted this world to be more forgiving. I have dedicated my life to end hate. I believe, though, that the end starts within each of us. Take time to soften your heart, connect with others. We must stand up against human suffering.”

His path to forgiveness was a struggle uphill and took him years, but it was worthwhile, he said.

“I took control of my happiness. Forgiveness takes a long time. I was slowly rebuilding my life,” he said. “It strengthened my faith. I went through the healing process for nine years. Then I realized saving a human life was the right thing to do, it was more worthwhile. Diversity is a strength. It is what this country is built on. And things can change. People can change.”