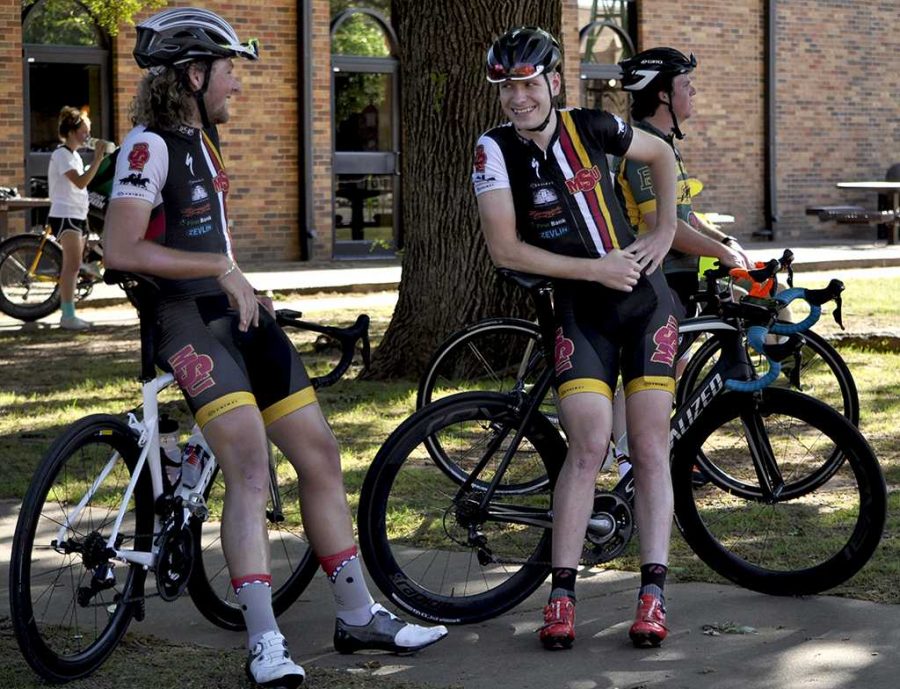 The roads throughout campus were closed April 9, the Vuelta Del Viento race. This race featured many university competitors as well as the cycling team.

“It’s 100 percent easier racing at home. Most races in our conference are between six and 12 hours away,” Bill Ash, accounting and finance junior, said. “Being stuck in the van for 20 hours every weekend is probably the most difficult thing about bike racing.”

Cyclist Pablo Cruz raced to win the men’s A criterium in New Orleans on April 16. Maxyna Cottam took the win for the women’s A criterium, with Brissia Montalvo and Amy Floyd rounding out the winner’s podium. This marked the ninth consecutive conference title for the cycling team.

Cycling races average between 60 to 100 miles long, each having their own unique challenges.

“The wind is particularly brutal here in Wichita Falls and in Texas in general,” Ash said. “Having to suffer through your competitors attacks and having to deal with the wind if you get caught out at all makes racing here particularly difficult. On top of having to race 60 plus miles.”

According to Ash the team’s main goal for this race was to keep teammate, physiology sophomore Pablo Cruz in the conference lead and to try for the win.

“We came up a little short in the end, but we were still able to get Pablo on the podium and defend his season long lead,” Ash said.

Training for cycling requires dieting, decent sleep, body weight exercises and 12 to 20 hours of bike training a week, all on top of the usual student responsibilities. Many cyclist injure themselves during the races.

“Currently I am injured,” accounting and finance sophomore Joshua Buchel said. “I still raced, but only for as long as my body would allow, before having to pull out to make sure I don’t injure myself more.”

Previously Buchel suffered a crash at the Arkansas Classic and has since been in recovery. This is the cyclist first home race this semester.

“My favorite part was getting to share the experience with friends, teammates and all the people who support and make Midwestern State University cycling program reality,” Ash said. “MSU faculty and the people of Wichita Falls who support us getting to watch us race is always fun. Since most of our events are so far away it’s a great feeling to get to put on a show and share the experience with everyone.”