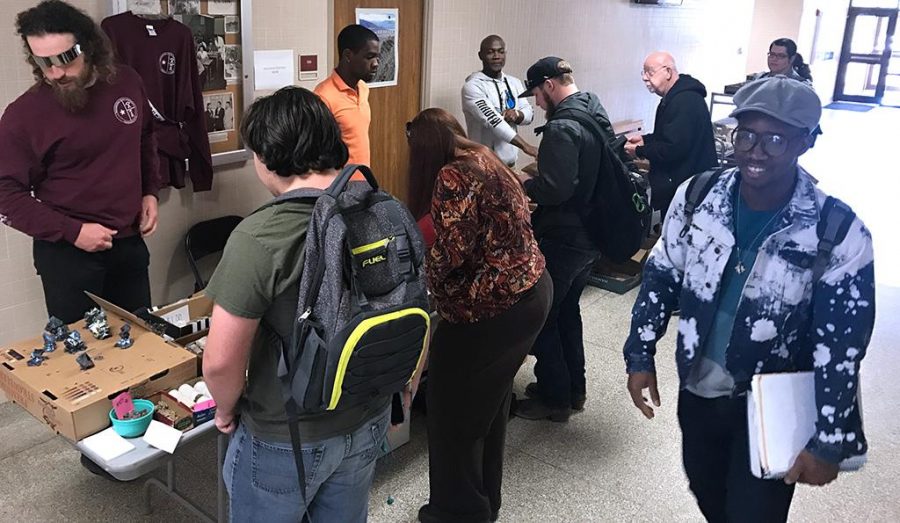 Students stand in line to peruse and purchase rocks at the Geoscience Club Rock Sale on March 29-30. Photo by Caleb Martin

Rocks, stones and minerals both old and dirty, dense and smooth, tiny and shiny, were put on display for sale in the hallway of the Bolin science hall on March 29 and 30 to raise funds for the Geoscience Club’s field trips and club outings in the future. Of all the earthly bodies available, it was the geometric bismuth crystals, home grown by a MSU student, that stole the show.

Gabriel Jacobs, a geoscience graduate student, stood behind a table adorned with excavated earth. From time to time, Jacobs would tell visitors small facts about different rocks or fossils the club had for sale. Jacobs believes that even with donors and funding from the university, the Geoscience Club can still use some extra cash.

“We’ve got some funding from various donors, some from the university, but it’s nice to have some petty cash so we can do things like take students on trips to look at interesting outcrops and see things like last spring when we went to see Enchanted Rock,” Jacobs said.

Students stopped to peer into the boxes upon boxes of various rocks and minerals, rummaging through the broad assortment of dark and light colored stones looking for a home. The selection was vast and boundless, but it was the bismuth crystals that had caught the eyes of nearly every passerby.

“I’ve never seen those [bismuth crystals] before,” Kevin Anderson, biology junior said. “Mother Nature is a true artist, and when I see things like this I’m just in awe.”

The bismuth crystals, with their rainbow luster, 90 degree angles, and void-like structures came in a variety of shapes, sizes  and prices.

Dalton Parker, geoscience senior, makes the bismuth crystals in his garage. He had always admired the way crystals looked, and decided he would give crystal making a shot.

“I’ve always liked the way the crystals looked and how they changed colors off the temperature at which they oxidize,” Parker said. “I had prior experience dealing with melting metals and the safety that’s involved. So I decided to give it a shot because I wanted to make some for myself. After I made a few, my dad pointed out that the quality of crystals I was making could be worth money and that people would love to buy them.”

Parker’s new found ability to produce crystals at home led him to partner with the Geoscience Club to sell his crystals at rock sales.

“I made a batch, took it to my geology professors, and they loved the idea. By some dumb luck I unknowingly took the bismuth crystals to my professors three days before the rock sale,” Parker said.

The next rock sale will be held mid-fall 2017. The selection of rocks and minerals featured at the sale vary depending on where the Geoscience Club traveled prior that year. Parker plans on bringing more bismuth crystals to the fall 17′ rock sale.

“The selection changes depending on where we travel,” Jonathan Price, geoscience chair and Geoscience Club advisor said.

This semester the Geoscience Club will be traveling to north-western Oklahoma to visit and explore selenite deposits.