MSU the first to witness robot officiate a wedding 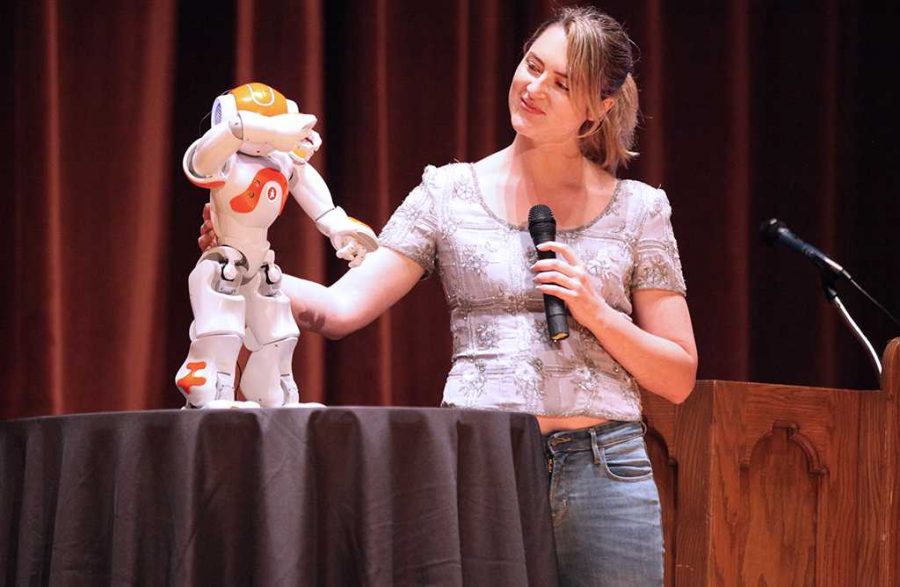 Heather Knight, robotics engineer, has Ginger the Robot greet audience members and give a short monologue. Knight said that Ginger officiated her first wedding this past weekend. Photo by Kara McIntyre

Robotics engineer and computer science professor at Oregon University Heather Knight was the guest speaker for the Artist Lecture series on March 21. In this lecture series, Knight talked about her field of robotic engineering and introduced MSU students to Ginger a robot, who is apart of a robot theater company called Marilyn Monrobot. Ginger works as a computer that can talk and walk. Students were also the first to see Ginger officiate a wedding.

“Marilyn Monrobot is the intersection of robotics and the performance of theater or film,” Knight said. “I contribute to the academic community in writing research papers and so on. I also create robots based on entertainment and I run a robot oil festival. I do comedy with my robots so that entertainment stuff is under Marilyn Monrobot.”

Many of the students who have attended claimed that their favorite part of the lecture was seeing the robots.

“I got excited just for the robot,” Catherine Stepniak, psychology and sociology senior, said.

Knight did a robot comedy performance at a TED convention. She explained that the presentations for TED require a lot of rehearsal and time. There are also people in the organizational committee who give presenters feedback on their presentations and rehearsals.

“I think I was getting texts from one of the members of the organizational committee at 11 p.m. because she just thought of something else from my presentation that she had seen in the afternoon and she wanted to chat with me during the reception,” Knight said.

The TED committee also helps the presenters in framing their presentations.

“People at TED are amazing story tellers, and so they help teach people to tell their stories,” Knight said.

This includes the increasing numbers of robots entering the workforce in the manufacturing and service sectors.

They are many challenges robots and people face as the workforce becomes more automotive. She concludes that robots must deal with negative public opinion about their presence.

“People must also learn how to share space with the robot going through a hallway and figuring out who goes through the door first,” Knight said. “Social intelligence is the new branch of artificial intelligence. It will make or break the acceptance of robots into human society.”

Once she began building robots, her love for them began as well. She also started working with robotics as a freshmen in college with Cynthia Breazeal, founder of Robotics Engineering and Social Robotics.

“It was really inspiring to be working on technology that you didn’t need to explain,” Knight said. “People can walk in a room and just interact with a machine that is is like an animal, or a child.”

“I think that robotic engineering needs as many creative minds as it can get, and diversity is always a fantastic thing.” Knight said. “We’re designing machines for people, so you want to have all of society represented in prioritizing what matters.”

“Have fun,” Knight said. “With Wiimotes and Raspberries and just being able to go into 3D print stuff, there are so many opportunities for creating things.”

There is also the enjoyment Knight has in the storytelling, such as other’s personal experiences with robots. She said she also enjoys thinking about the possible human characteristics robots can have when connecting with people.

“I love things like the first robot competition and seeing people building robots,” Knight said. “I also think there’s a lot of room for thinking about robot characters and robots that can connect with people and even anti-social robots. I think that playing with that human machine interphase is where the future is.”

Matt Park, dean of students, explained the cost of having her at this event.