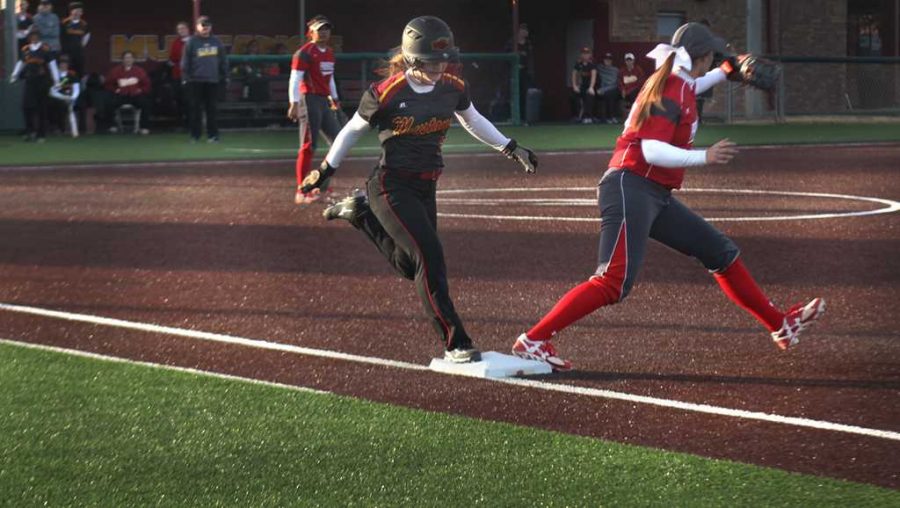 Lauren Lindgren, freshman outfielder, runs to first base in the game against Oklahoma Panhandle State. Photo by Leah Bryce

Though the girl’s softball team has been performing well— holding a 6-6 record— they were hit with a troubling grand slam: sickness. Conditions on campus have spilled onto the playing field, taking players out with two cases of strep throat and three cases of the flu. With only nine girls for seven positions on the field, getting well is on the forefront of head softball coach Mark Ryal’s mind.

“Been hard to get a whole team out there with full strength,” Ryal said. “I won’t know till Friday who can play next week. It’s going around campus really bad right now.”

The widespread flu status on campus has the athletic trainers pushing for better hygiene among athletes. Trainers are saying to not share towels or clothes, cover mouth while coughing, wash hands, and if they are sick to let people know. Trust between trainers and athletes is important for better health, explained Samantha Carter, assistant athletic trainer.

“It’s hard to trust someone new but this [softball] team have giving their all, trusting us and listening to us to keep themselves health,” Carter said. “It’s always good to let our athletes know what we are doing to help.”

Athletic workrooms are being cleaned thoroughly by trainers to try and prevent any sickness on campus spread among athletes. Weight bars wiped down, benches sweat-free before the next athletic group and changes to workout schedules.

“We have pulled back on what we can do,” Nathan Morris, strength and conditioning coordinator coach, said. “Weather has also been a big issue, some days are 90 degrees, then rain and cold the next day.”

Sunday games canceled due to the umpire’s issue with the padding on the back wall. The padding failed to cover a corner of the concrete wall. While the field was playable on Saturday, the new umpire declared that the team couldn’t play on it on Sunday. Ryal explained that he gave the Mustangs’ game times to the other teams, since they came from across the country to play in the tournament.