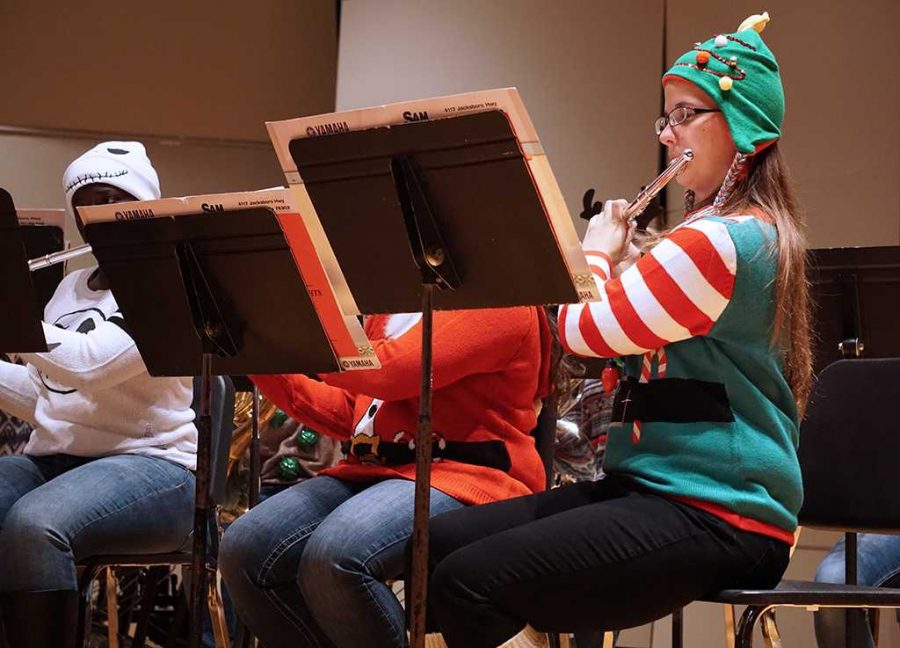 The MSU-Burns Fantasy of Lights opened Nov. 21 at 5:30 p.m. with chimes from the Hardin Bell Tower. Then, two minutes before the scheduled 6 p.m. start time, University President Suzanne Shipley, came out, welcomed the crowed of about 200, turned on the lights and welcomed the guest of honor — Santa Claus.

All went according to plan.

The $80,893 light setup has been on display at MSU since Dec. 4, 1974. Originally a family tradition of Wichita Falls locals Mr. and Mrs. L.T. Burns, Archer City offered the display to MSU on the condition that it be free of charge to the public as a memorial to the Burns family. The 20,000 lights and 35 displays are all paid for by private funds and donations, and 13 new displays have been added since MSU took over the Fantasy of Lights in 1974.

“Well there are over 20,000 lights strung around campus, as well as out there on the displays. [My favorite part of the Fantasy of Lights] is just seeing the excitement, the joy in everyone that comes out and walks through. It just really helps me capture that youthful spirit in that moment, in the holiday spirit…so it really makes it ring true for me,” Dirk Welch, director of the career management center and Fantasy of Lights coordinator, said.

Welch was given the task of coordinating the Fantasy of Lights in September, 2016. After a culmination of ideas from various people, the Holiday Spectacular was added to the list of events for MSU-Burns Fantasy of Lights on Dec. 3.

Welch smiled when asked about his experience with coordinating this annual MSU tradition.

“I was approached back in September about being the coordinator for this, and I was excited to be given the opportunity. It was an honor and privilege to be asked because it’s a big undertaking and really impacts the community of MSU as well as the surrounding area. I’ve loved seeing the passion of the volunteers and watching the joy it brings to the people who come to see the lights — the smiles on their faces, the giggles, etc. It makes it doubly worth being part of it,” Welch said.

Welch explained that all of these events give exposure to MSU and connects people together.

“It’s estimated that more than 200,000 people visit the exhibition throughout the season. It provides MSU, Wichita Falls community and surrounding areas with a Hallmark type of activity because it is one of the largest holiday displays of its kind. It brings in people from outside the area to come and visit, which can certainly help the community and has a potential economic impact. It also showcases MSU in a positive way and helps the university gain exposure in a different sort of way, which benefits us overall,” Welch said.

“Peter Pan [is my favorite] because I was obsessed with Peter Pan when I was little, so it’s pretty cool how they did that one.” | Amelia Ecevido, pre-pharmacy sophomore

“This is my first time being here, and first time seeing [the lights] on. It makes MSU pretty; it makes it more magical. Locals come here and enjoy the lights, and come see the main building.” | Christopher Cruz, theater performance sophomore

“There are figurines in one of them, and they’re super lifelike. They really freaked me out at first because I thought they were real people.” | Ciera Wolinski, biology senior

“This is rad. This is so lit.” | Tanner Conley, business sophomore

“These lights are beautiful. They’re brighter than my future.” | Rahul Joshi, finance sophomore