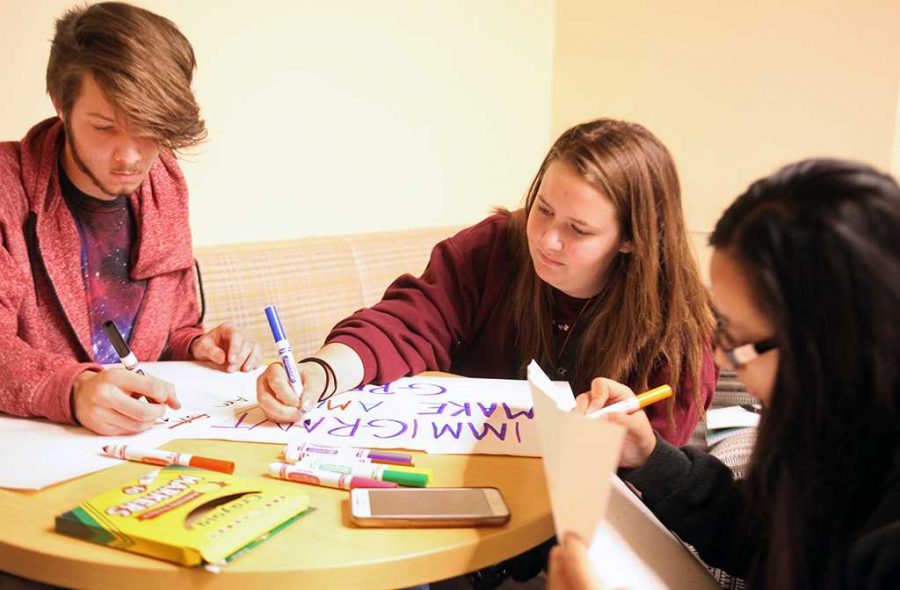 Mirroring protests all over the country since the election, students in People Respecting Identity Diversity for Everyone plan to use the signs at a rally — a peaceful protest — Wednesday at 1 p.m. on the Jesse Rogers Promenade (between the Clark Student Center and Killingsworth Hall).

“People need to see that they can’t live under a rock forever,” Morgan Sinclair, sociology sophomore and PRIDE historian, said. “They need to see what is really going to be affecting us.”

According to some students, this election has been much different than previous ones.

“I’m kind of shocked by the impact that this election has had on people,” Victoria Post, biology junior, said. “I mean, I know it has been totally different than any election we’ve had before. It’s good to see people and especially students standing up for what they believe is right.”

Sinclair wants this to be a peaceful protest and will be doing so with their mouths taped and signs held high.

“Students mouths will be taped to have a peaceful protest, to combat discrimination, promote understanding and spread awareness of current social turmoil,” Sinclair said.

Cece Casillas, sociology sophomore and PRIDE treasurer, will be out there to promote understanding and love.

“People need to be more understanding of other people’s situations and that is the reason for our hashtag #msulovesu, no matter who you are, you are suppose to love. We are going to be out there to promote understanding and love,” Casillas said.

“It’s going to be cool to see how many people turn up for it,” Post said. “I’ve never been to a rally or a protest before, so it’s a new experience for me.”

Some faculty members addressed the importance of protesting and of students knowing their rights.

“Part of the reason why we are seeing a lot of these protests, is indeed because you are watching the millennial vote that was essentially casted aside and these are the individuals that are very frustrated,” Andrea Button, assistant professor of sociology, said. “So if you are upset, you have the right to peacefully assemble and protest.  You have the right to hold your government accountable — that’s the point of having a representative model.  If your citizens and your government aren’t in sync, there will inevitably be conflict.”

Sinclair expanded on Button’s points, because many minority groups are “scared” for their lives.

“If we get at least one more person that is not in a minority group to understand for us to feel this way as Trump and [Mike] Pence are taking office, they might be able to see why we are afraid for our rights and why we are afraid for our lives,” Sinclair said. “It’s not necessarily the fact that that we lost our candidate. No. I don’t support Hillary. I didn’t vote for her. It’s the fact that we are scared.”

Critics in the area will be watching in aversion, however, Button explained how a protest, including one she said would be held on inauguration day, Jan. 20, 2017, could hold Trump accountable once in office.

“You cannot change the outcome of the election, but what he is learning is that he can be held accountable, and that is the lesson that needs to be taught,” Button said. “If Trump is tamed, he is only going to be tamed by the Republican Party, but that requires them to take a stance they’ve never taken before. Really at the heart of these protests is the making him accountable.”

Sinclair and Casillas said they are planning to reach out to Black Student Union, Organization of Hispanic Students and Cynosure for Understanding of Islam and Comparative Religion, and will be on the lookout for any acts of violence.

“This protest is not out of hate. We want this to be peaceful. We’re not looking to cause hate towards minorities on campus. We just want to spread love,” Sinclair said. “There will be stops to any acts of violence.”

In opposition of the peaceful protest sponsored by the PRIDE group, student Gabriella Victoria, criminal justice senior has decided to create a counter protest held at the same time and place. Victoria explains her counter protest to be a protest about not respecting the process of democracy.

“This counter protest is to protest not respecting democracy.” She said “A lot of republicans were not happy when President Barack Obama won – twice, however, we didn’t riot or burn things down, try to fight people or find loopholes to get it turned over. We dealt with our eight years, we were sad about it, we hated it, but we respected that the people voted for him and the electoral college voted for him and we respected that process. Now we see this with Trump and everyone is trying to find loopholes, they’re calling for his assassination, they’re destroying cities, and people are getting beat up. That is not respecting a democratic republic.”

Victoria also has the agenda of a peaceful protest in mind.

“Were not looking to get into a screaming match or anything, all our posters are going to be respectful, there will be images and quotes.” She said. “One of the main things we want to target is the misconception that Trump is anti LGBT. There is a lot of false information floating around that he is going to reverse same sex marriage when that was never anything he ever said. So we are going to target specific items that are floating around especially on social media.”

The road as a republican and a Trump supporter hasn’t been as glamorous as Victoria would have liked it to be in this election.

“If you were a Trump supporter, you got called a racist, bigot, misogynist, and what democrats have learned, is that by name calling, you don’t change anyones mind, you just drive those voters underground.” She said. “A lot of Trump supporters would never openly admit in public that they are Trump supporters  because of the backlash. I know myself I would not put a Trump sticker on my car, because I have the fear of it getting keyed, or my windows getting broken. Now that we know the DNC paid democrats and homeless people to start fights, yet I would never look at a car with a Hillary sticker and think I need to go key that car. So we were driven underground for the fear of being called names and retaliation.”

#MSULOVESU Join us Wednesday on Mustangs Walk at 1pm! Our voices will be heard. Invite your friends, roommates, or anyone you think would want to join. #pride