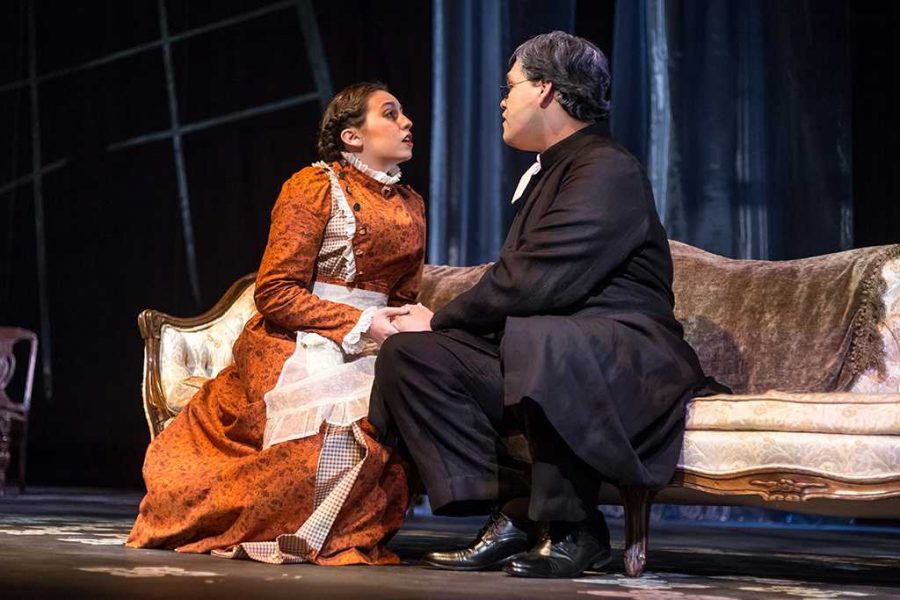 Taking to the main stage with its first full-length production of the season, the theater department presents “Ghosts,” by Henrik Ibsen, set to open Thursday, Oct. 6. Tackling the subjects of outdated and oppressive traditions, cast and crew say they’re excited to present the final product.

“It’s not about real ghosts. It’ll definitely be haunting, but not in the supernatural way.” Evagelia Economo, theater freshman, laughed. “It’s all about lies. You get to see the whole dynamic of the things that get buried or swept under the rug, and the toll these lies, or ‘ghosts,’ take on those who go to such lengths to hide them.”

Though “Ghosts” is one of three main stage productions of the school year, the cast is only made up of five students. Karen Dabney, director, said, that has been, in fact, one of her favorite parts about the production.

“When you only have five in a cast, they can’t help but form these important bonds,” Dabney said. “Having such a small cast allows me, as well as the actors, to really perfect their portrayals and fine tune those details that make a production.”

Along with this being her first main stage production at MSU, Economo says Dabney’s directing style provides her with a unique experience, as well.

“It’s so different than what I’ve been used to, and I love that,” Economo said. “I’m used to learning all of my lines at the very beginning, and going from there. But, with Karen, her techniques are nothing like I’ve worked with before. She’s had us really look closely at what it is that the characters are saying, which has given me insight that I otherwise could have missed out on.”

Friday, Oct. 7, the cast and crew of the play will host a “talkback” immediately following the play. A talkback gives the audience an opportunity to ask the cast and crew any kind of question, ranging from the characters to the set design.

“Talkbacks are always a good time,” Economo said. “Of course, it’s for the audience, but I think it’s always cool whenever an audience member asks a question that makes us, the actors, think. It just goes to show that you can still get new insight on these characters, even after a month of stepping into their shoes, day in and day out.”