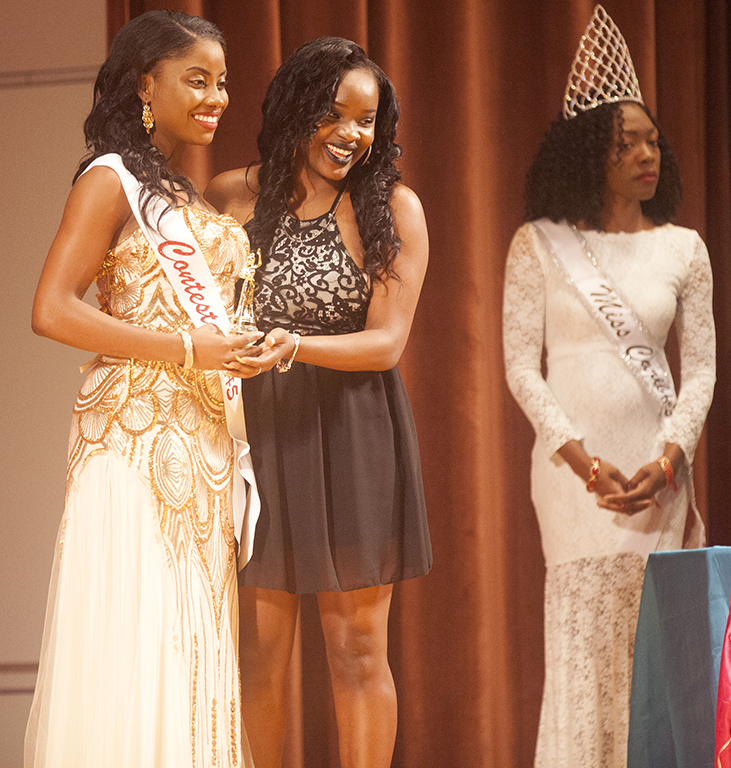 Kamilah Tobin, freshman in mass communication, accepts an award from Kinisha Morris, a junior in social work, in the Miss Carib Fest 2016. Photo by Naomi Skinner

For the 19th year, members of the Caribbean Student Organization hosted Caribfest to bring island culture to campus while raising money for local groups.

Timon Thomas, the Caribfest chair said, “The money goes to charities such as the Disabled American Veterans and the Wichita Falls Independent School District.”

The week opened with a Soca Show, during which Caribbean students performed some musical pieces under the pavilion at the Wichita Falls Museum of Art.

Kevin Bryan, biology junior and pianist, said, “I was kind of pushed into joining because someone saw me playing the piano,” Bryan said. “So they said that I was joining.”

Bryan is from the Island of Dominica and this is his first year in Texas.

“I’m kind of nervous because this is my first time to play in Texas.”

The Queen Show, the next day, Friday, five students competed in a beauty pageant.

After about a 45-minute delay, eight judges ranked the girls in four different categories: talent, swimwear, evening wear and an interview. Some of the judges were delegates from the Caribbean visiting Wichita Falls.

The pageant was competitive but of course only one contestant could take home the crown.

“I’m really surprised that I won,” Tobin said. “I feel like I made my mom proud and feel accomplished.”

And she said she competed to encouragement to others.

“It’s human nature to be nervous,” Tobin said. “But I was confident because I had one mission; encouragement for family and friends.”

After about a 45-minute delay, the parade began an ended on campus. Several Caribbean students covered in gold paint, or wearing the bright feathery outfits, friends and family joined the walk around campus accompanied by entertaining music and dancing, with veterans to lead the way.

Caribfest ended on a fun note with the Glow Fete; a party with body paint, food, a DJ, and a dark room with glow sticks.

“This event is the one that’s the more colorful,” Rocksen Jean-Louis, sophomore in mechanical engineering said.

Like the other events the party, with about 50 participants in Comanche Suite, didn’t get started until late.