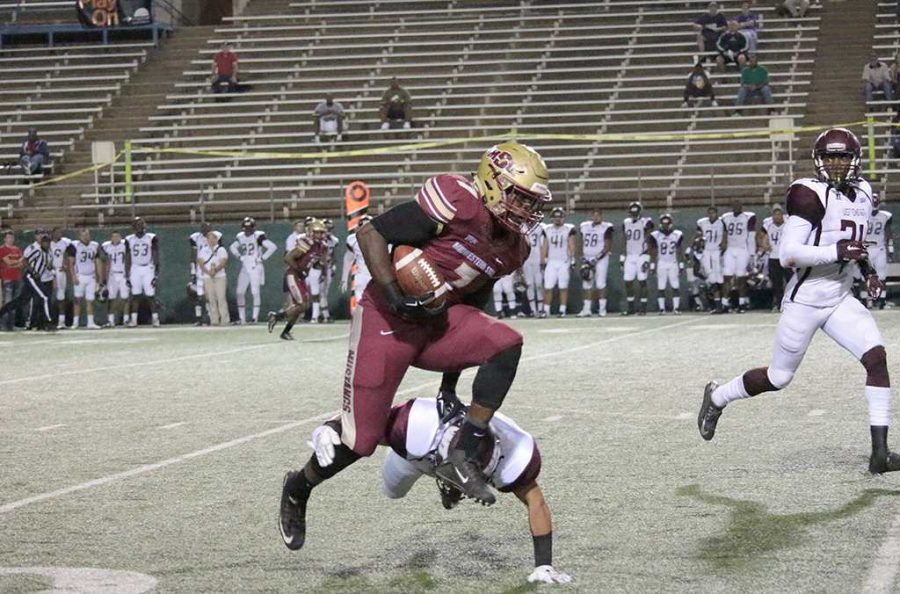 Derek Lockhart, sports and leisure senior, avoids a tackle from an opponent from West Texas A&M Oct. 10, 2015. "Division two is the best! Woo! This game is nice to go to because it feels like back home, even if it if many miles from our real homes," Drake Allen, airman. Photo by Kayla White

After the men’s soccer team suffered its first loss of the season and first opening home game loss since 2013 to Northeastern State on Monday, the team is looking to get back to winning ways as they take on conference rival West Texas A&M. The game is scheduled for 7 p.m. on Thursday at the MSU soccer field and marks the commencement of Heartland Conference play for both sides.

Senior goalkeeper Noah Fazekas said he believes this game holds massive implications and could be a turning point in the season.

“Obviously it’s West Texas A&M vs. MSU, so it’s going to be a huge match for us. It’s nearly like a playoff atmosphere when we play those guys. It’s always one of the hardest games of the year no matter what and it’s even bigger now that we are in the same conference again. We will accept nothing but a win,” Fazekas said.

West Texas A&M is 3-1 on the season and have won their last two games. Sophomore midfielder Ivan Ulloa leads the buffs with three goals and one assist in four games. Junior goalkeeper Patrick Satorie holds 0.34 goals against average record with a 0.917 save percentage, having made 11 saves and two shutouts in three appearances for the Buffs. Defensively, the Buffs have conceded two goals in four matches, and their current form offensively could cause problems for the Mustangs, as they have scored 13 goals combined in four matches played.

Nonetheless, Fazekas is very confident that his back line will hold firm.

“I’ve got all the confidence in the world. We have given up some goals early but we are getting better every day. We will be up for the task and it will take a total team effort to get a shutout but more importantly a win,” Fazekas, mass communication senior, said.

The Buffs stretched the Mustangs to double overtime in the last encounter before narrowly losing 0-1. West Texas A&M Head Coach Butch Lauffer said he is feeling optimistic about his team’s chances in the upcoming encounter.

“We feel good about Thursday. We played very well down there with a very young squad last year and lost in double overtime. We’re excited about being in the conference and there’s nothing that intimidates us about going there, we have a very mature and healthy group of players, I feel really good about our chances down there,” Lauffer said.

Midwestern State is 31-17-3 vs. West Texas A&M dating back to 1975 and have won the last five meetings between the two sides.

The Mustangs have trained hard and are physically and mentally prepared to bounce back from Monday’s rare home defeat, according to Graduate Assistant Maik Brandt. Brandt also believes the team has prepared very well and is ready to win.

“We analyzed Monday’s game and pointed out things that went well and things we can improve. Losing games, especially a home game is something this program is not about. Having 3 games in 6 days is intense but we expect the boys to bounce back from Monday’s game even stronger,” Brandt said.

Midwestern State will host another conference rival in Eastern New Mexico on Sept. 17 for a 1 p.m. game at the MSU soccer field.