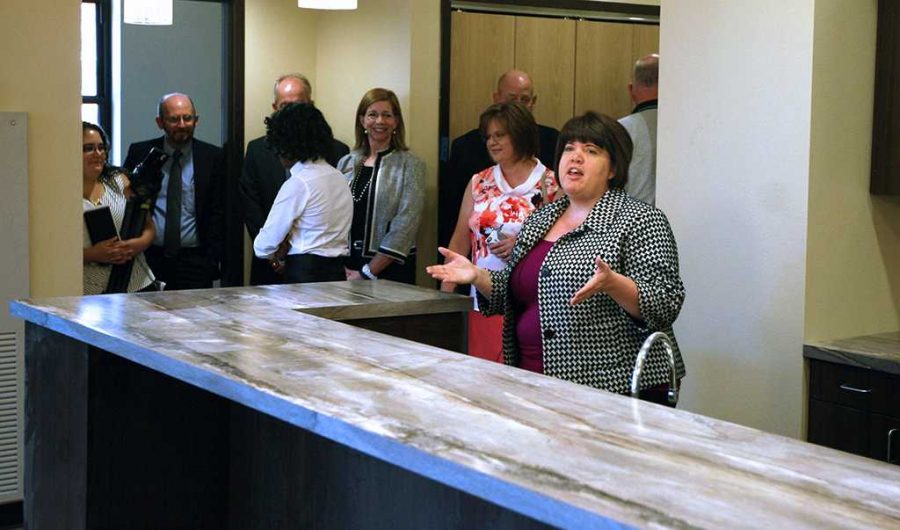 Kristi Schulte, housing director, gives details about the faculty-in-residence apartment in Legacy Hall to the Board of Regents during a walk-through on Aug. 4. Photo by Dewey Cooper.

Within days after classes were out in May of 2015, the parking lot behind Pierce Hall was blocked off. Residents lost 220 parking spaces.

During the next 18 months, contractors turned the parking lot into a five-story, 500-bed, $35 million residence hall due to be completed Aug. 1.

Now named Legacy Hall, the “F”-shaped building is not yet complete, but residents, some organized in themed communities will be able to move in beginning at 9 a.m. Aug. 20.

“I would say that one of the biggest challenges that come with construction is that there is a lot of ambiguity. We have some completion dates and we have some target dates that we try to stay on track with, but sometimes things come up,” Kristi Schulte, director of residence life, said. “You just have readjust your schedule, so for a department that typically likes to run a very scheduled regimen, working with construction means that instead of having a list of concrete dates and deadlines. We have to be flexible.”

Schulte said students who needed to move in early to Legacy but weren’t able to because of the prolonged construction were accommodated at Pierce and Killingsworth and “seemed to understand.”

The delays in the $35.25 million building, Park said, were primarily due to changes in the master plan by the construction manager, Buford-Thompson.

Located on the north side of Fain’s B wing, Legacy Hall will make the fourth residence hall on campus and the second co-ed hall. Floor plans for both private and semi-private dorms will be the same, except for the privacy wall separating the room. Each room includes an adjustable bed, desk, rolling chair, micro-fridge, microwave, vanity with sink and a three-drawer chest.

The second floor will be divided by communities and gender. Floors are co-ed, but each wing on the floor is gender specific.

“The second floor has been identified as a living learning community, and our themed communities have been clustered into the second floor,”  Schulte said. “We will have health and human science majors, business majors, first generation college students and a wellness community.”

Each community will house around 30 students, and bathroom ratios are one bathroom for every five residents. A community lounge and study room will provide open areas to study as well as full kitchens and laundry rooms for each floor. The first floor will offer mailboxes for all residence halls, a convenience store, activity center, learning center as well as gaming room. The store will be staffed from 7:30 a.m. to 2 p.m., and will also accept meal plans.

At full capacity, Legacy Hall can house up to 500 students but Schulte said they were expecting 492 to live there starting this fall and a system-wide capacity of 90 percent.

In addition to the students, one faculty member and 16 resident assistants will be living in Legacy Hall to reinforce campus relationships between students and faculty.

Steve Hilton, associate professor of art, will be living in Legacy Hall with his wife and 2-year-old son.

“The reason I became an educator and an educator at this level is because I like students. They can be goofy but so can I. They keep me young,” Hilton said.

His purpose for having an on-site home in Legacy will be to be a liaison for students and faculty to ensure academic success while hall directors and resident assistants aid socialization.

Hilton said he is excited for the upcoming move and said he and wife were somewhat used to changes since they both come from military backgrounds and were always facing constant moves. Hilton even counted the steps from his instructional studio to his apartment door and found that he works 230 steps from where he will sleep.

Hilton said he not only volunteered to be the first faculty living on campus but had seen the same done on other campuses and welcomed the idea.