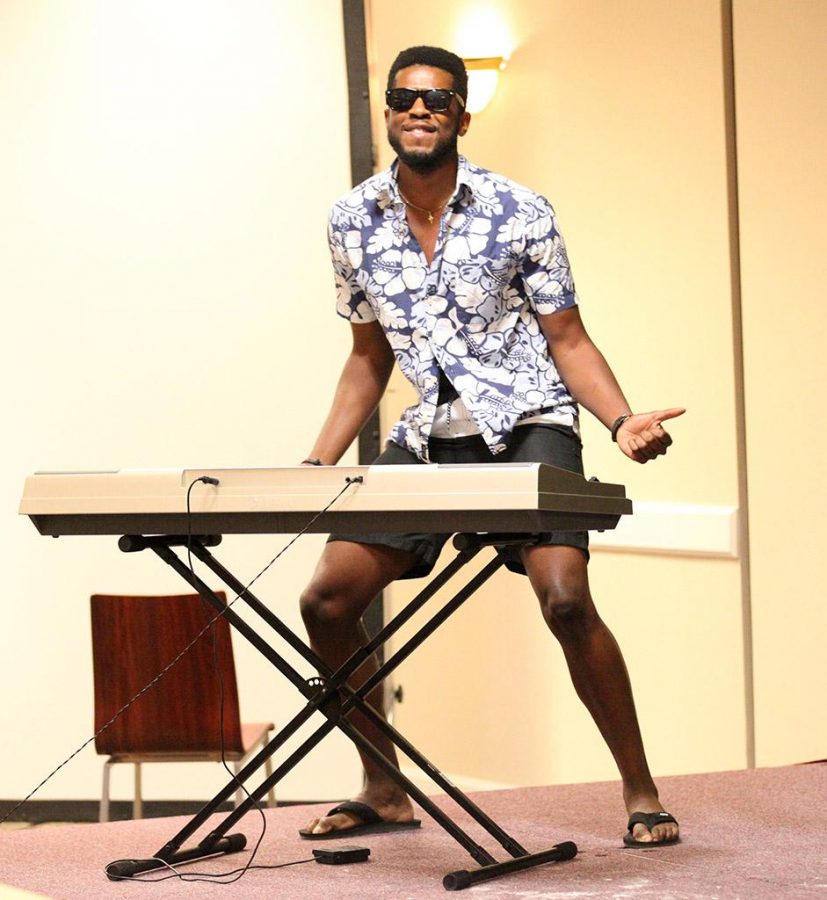 Education sophomore Shelby Emerson was the leading force behind the event, and her and Alpha Phi members had been planning for Mr. Heartthrob for a month and a half. This was the first time the sorority has put on the event, and Emerson said it was a big success.

“It’s been put on before but by different organizations. Mr. Heartthrob is our variation of the event, and it’s been a huge success for our first year,” Emerson said. “We’re planning on making it an annual event, and we’re hoping it’ll grow each year.”

The event, Emerson said, was relatively inexpensive, as Comanche Suites was already set up and the only cost was a paddle and fake crown awarded to Mr. Heartthrob, history junior Coleman Reidling. Reidling was picked out of the 10 contestants to be this year’s Mr. Heartthrob by a panel of four judges consisting of sorority presidents. These judges picked a top three and then narrowed it down to just one winner: Reidling.

“I would definitely do an event like this again,” Reidling said. “I entered the competition simply because I was invited to. Once I learned a little bit about the contest, I figured it would be fun to be a part of.”

Reidling said the audience of about 50 people seemed to enjoy the contestants. He said he also enjoyed the event, as it raised $500 for women’s cardiac care, and its education, research, screening, and prevention.

“I have taken part in talent shows and played guitar and piano at some different venues around the country,” Reidling said. “However, I’ve never danced to Def Leppard in a swimsuit as powdered sugar was dumped on me. That was a new experience for me for sure.”

Like Reidling, some of the other contestants have also taken part in other talent shows, like Lowell Nash. Nash was named People’s Choice, since the crowd was able to pick out their favorite by cheering the loudest for one of the contestants.

Students in the crowd, like mass communication junior Brianna Hall and accounting freshman Oneida Mireles said they enjoyed the event and thought it was entertaining.

“It was a lot of twerking. But it was interesting because women are usually up on stage and so it was different and unique to see men up there,” Hall said. “It was a great group of guys.”

Both Hall and Mireles are involved with Alpha Phi, but neither had any problem with the presentation of the event.

“The only thing that caused a bit of problems was the songs from YouTube,” Hall said. “But it was entertaining at the same time, and everyone played along with the ads that popped up.”

Mireles also thought that there were no problems with the event.

“I liked all of it,” she said, “it was really fun and entertaining.”

Mr. Heartthrob was a unique twist on ‘beauty’ pageants, providing the crowd with humorous questions and answers. Contestants often sent the crowd into giggles with hilarious skits and props – some of which included powdered sugar, or “sand,” and a floatie during the swimwear portion.

The talent portion of the event comprised of guitars, pianos, and live singing, as well as dancing and a High School Musical duet one contestant performed with himself.

Though Mr. Heartthrob was a special take on pageants focused purely on women, students like Hall and Mireles were not totally opposed to even more uncommon takes on such a competition; like the drag show taking place on May 6 at 7 p.m. in Comanche Suites.

“I’d be all over that event,” Hall said. “I always watch RuPaul’s Drag Race on TV and so I’m definitely going.”

Mireles said that she is also interested in the event, and she said that it would be nice to see something so distinct and individual.

“It’d be entertaining to watch,” Mireles said. “Something like this isn’t put on often, so I’d like to see it.”

The Drag Show will be hosted by the PRIDE organization, and the proceeds – $1 for tickets – will go to the local humane society.