Athletes look to build on past successes 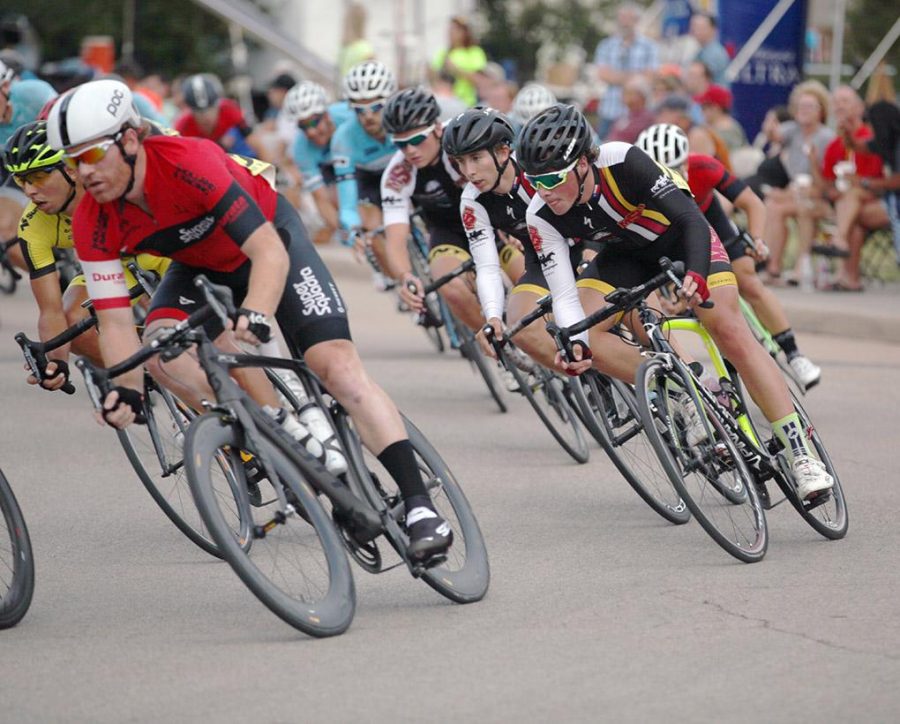 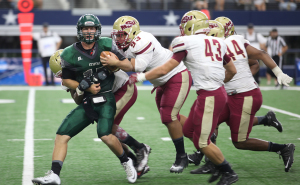 The football team finished its 2015 season 5-1 in conference and with a 10-2 overall record. Twenty-two players earned All-Lone Star Conference honors, and three made on the Don Hansen All-American team.

Solomon Brown, graduate assistant, said, “This year we were good. We had a lot of young guys playing. Now that they have had a year to develop, we will be even better.” His warning to their opponents, “Get off the tracks ‘cause the freight train’s coming.”

The team then added another player to the list its NFL draftees. Drafted by the Arizona Cardinals wearing No. 1 Marqui Christian is the 28th pick in the 5th round of the 2016 NFL draft.

The Mustangs are set to kick-off their 2016 season in Sept. 3 on the road against Truman State in Kirksville, Missouri.

Though the volleyball players hoped for a change under new head coach Natalie Rawson, this season’s outcome was similar to the last. The team finished ninth in the conference for the second straight year with 0-16 record in league play, and six wins with an overall record of 6-26.

Though the records are low, junior outside hitter Aerielle Edwards said “We have talent. We just have not all been on the same page.”

She is excited for the potential she sees in her last two seasons.

Edwards said, “We will be better. We are finally all getting the mindset of champions. Everyday we are collectively becoming a great team.”

From 2008-2001, the cross-country team swept the Lone Star Conference, winning four conference championships in a row. In 2011, the team won its first NCAA D-II South Central Regional Championship and it sent runners to the NCAA national meet in 2008, 2010, and 2011.

The team has succeeded in the outdoor track division as well. This season Bridget Rielly posted a NCAA Division II provisional qualifying time in the 1,500-meter run with a time of 4:33.95. She also made MSU history as the university’s first LSC Indoor champion. Rielly is enters the record books in the company Emma Ramirez. In the 2015 season Ramirez became the MSU’s first All-LSC outdoor track athlete after she took home the gold in the Outdoor Track and Field Championships with her 11:10. 33 time in the 3000-meter Steeplechase. 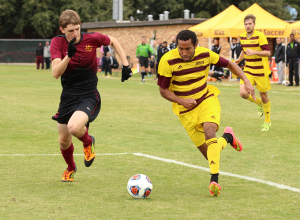 Christian Okeke, undecided junior, dribbles the ball past a Colorado Mesa opponent in attempt to shoot a goal, during the NCAA II Round Two play off game held at the MSU Soccer Field, Nov. 15, 2015. MSU beat CMU 4-2. Photo by Rachel Johnson

The men’s soccer team finished the year with a NCCA postseason run, ending the season with a one goal loss to Colorado Mines in overtime.

The team not only had great records, but also great chemistry.

Junior goalkeeper Noah Fazekas said “This team is like a family. We are a real tight knit group. We always have each other’s backs.”

The women’s team finished it’s season with a loss to West Texas A&M in the LSC quarterfinal round.

This year’s team claimed the LSC title with a 10-4 conference record and finished with an overall record of 24-6. After conference play they were ranked first in the South Central Region and hosted the Regional Championships. They were ranked fifth in the nation by the D2 Media Poll. Despite their high ranking the Mustangs were stunned by the Lubbock Christian University Chaparrals in the first round of the regional tournament.

After graduating seven seniors last season this year’s women’s team squeezed into the LSC tournament seeded eighth, the lowest seed. The team fell short in the quarterfinal round to the West Texas A&M Lady Buffs, finishing the season 4-12 in conference and a 5-22 overall record.

The women’s attempt at a fourth-straight NCAA Sweet 16 appearance came up short as the 17th-ranked Mustangs fell to No. 15 Cameron for the third time this past season with a 5-2 defeat in the NCAA South Central Region #2 Championship. Midwestern State ended the season at 18-10 after making its 16th NCAA Tournament showing and fourth-straight postseason appearance.

Two of the youngest programs on campus, men’s and women’s golf, were started in 2006 and 2009 respectively and both programs have had their fair share of successes under coach Jeff Ray. The 2012-2013 men’s team became the first team in program history to win the LSC Conference Tournament.

In 2015, after finishing seven times over the past three years, Brenna Moore claimed wins in the two biggest tournaments of her career as she became the first national title in school history by winning the 2015 NCAA Division II Championship.

The softball program reinstated in 2004, is heading into its 14th season under coach Brandy Tigert. The program has made nine NCAA postseason appearances and captured two LSC championships back-to-back. But its most successful season came in 2011, when the team made it to the semifinal round of the NCAA D-II College World Series.

In 2015, junior Kaitlyn Vinson carried the team’s regular season home runs with a total of 14 out-of-the-parks. She added another 13 home runs this season and was named the LSC Player of the Year. Senior third baseman Vinson was named a top 25 finalist for the 2016 Schutt Sports/NFCA Division II National Player of the Year award

They finished their regular season with a 14-18 conference record. 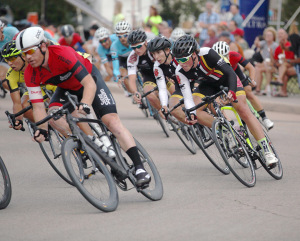 Joshua Buchel, leads the way for his team to get ahead, on Aug. 29, 2015 at the Hotter n’ Hell race downtown Wichita Falls. Photo by Rawlecia Rogers.

The recreational sports program includes a variety of sports, from the popular flag football and basketball to dodgeball and sand volleyball. Some 2,500 students participate in multiple divisions: men’s women’s and co-ed. Students who are interested can compete with teams or as individuals in sports such as tennis.

“Every year we have more and more students come out to play, and every year it gets more competitive and more fun,” Joey Greenwood, director of the Wellness Center and recreational sports said.

Members of the MSU Cycling Team will compete in the Hotter’N Hell 100 race in Wichita Falls, Aug. 27.

THANKS TO OUR SPONSORS