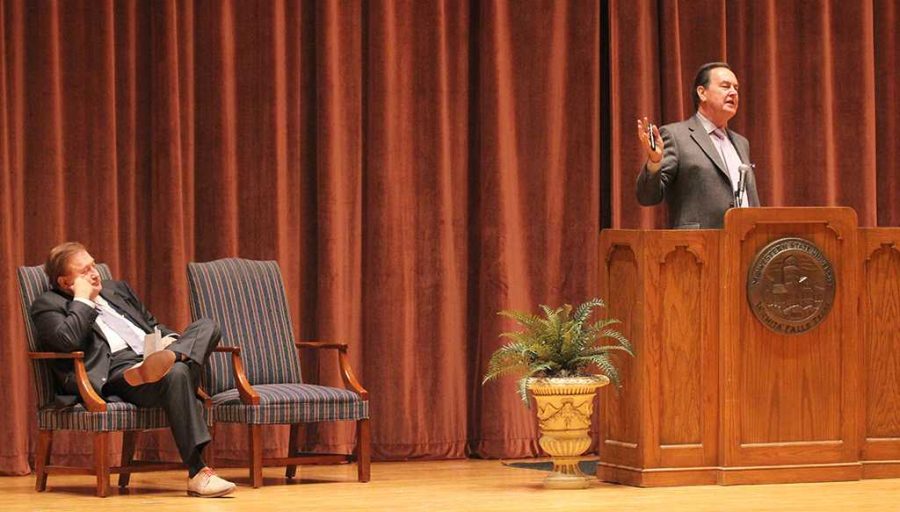 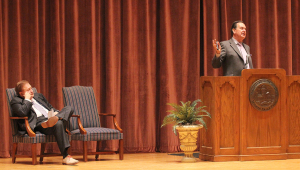 The two longtime – friends spoke on Common Ground, a political column that ran in USA Today from 2005 until the end of 2015.Thomas, a conservative Republican columnist, and Beckel, a Democratic strategist, join together to share a new approach to work through political differences and find agreements; a common ground.

The duo first met while both working for Fox as Thomas and Beckel recollected, “Cal kept asking if I had faith and knew God. He gave me something tangible about Christ and invited me to church.” said Beckel about the start of the unlikely friendship between the two.

Beckel is now an analyst and commentator for CNN since leaving The Five as co-host on the Fox News Channel in 2015. His political career started early in college while working for Robert F. Kennedy’s presidential campaign and later he was the youngest deputy assistant as Secretary of State during the Carter Administration. Beckel served in the Peace Corps in the Philippines and more recently made a cameo as himself on the series 24.

Thomas said so many people in Washington argue because the law makers are too busy “labeling instead of listening.” He continued about how much he has learned from his fellow colleague and friend: Beckel.

“During Vietnam, so many Democrats couldn’t express their honest views in fear of being accused a ‘commy’,” said Thomas. “I’m glad I listened to Bob on things like social security because he had it right all along.”

Thomas, former reporter for NBC News has also paneled on Fox News Watch, a show known for criticizing media. He has authored 10 books including The Bad Iran Deal and Hillary Is Losing It. Now, radio pundit and American syndicated columnist, Thomas maintains a friendship with Beckel and the two men make fun jabs at one another through their columns.

One thing both men admitted they agree on is the lack of justification by agencies for their budgets, they told the crowd of about 350.

“Agencies should be able to not only justify the balancing of budgets but also their existence,” Thomas said during his lecture. “If they aren’t working then they should be thrown out whether liberal or conservative. If it doesn’t work, it shouldn’t be there.”

They both exchanged light-hearted banter in between commentary during an intimate moment tucked away in a backstage dressing room. Beckel winced in pain from a recent back surgery but stayed cheerful while poking jabs at Thomas’ right-wing ideas.

Matthew Park,  associate  vice president and dean of students said costs to host the two speakers included two hotel rooms for one night as well as $20,000.

Physicist and author, Michio Kaku, will close the Artist-Lecture Series season on April 12.