Volunteerism: Give more than thanks 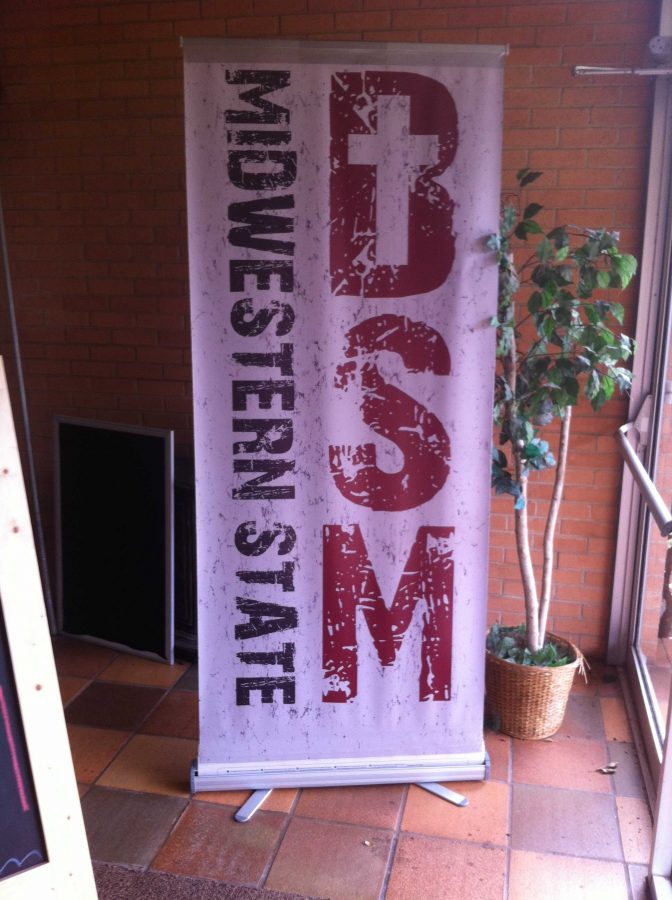 Baptist Student Ministry volunteers by serving low-income/homeless the last Sunday of each month.

However phrased, Giving Thanks can take on many meanings and lasts longer than the holiday season alone.

One way local people spend their holiday season is by volunteering and serving warm meals to those without. Locally, the Wichita Falls Area Food Bank serves 12 surrounding counties and estimates 9.8 million meals are needed to meet the needs of 39,050 that struggle to put meals on the table, yearly.

Behind the dull yellow doors of the Wichita Falls Area Food Bank, there are high-energy and friendly faces behind every corner. Donna Propest, development coordinator at WFAFB said, “We distribute to agencies, that have to be non-profit, and we receive from donations as well as supplement by buying direct from the distributors.”

Propest gives tours of the warehouse that receives and stores the goods that includes a walk-in freezer and three factory sized rooms to accommodate the many levels of pallets. She described, in detail, how the donated foods are weighed, sorted, sometimes cleaned and dispersed

In an intimate moment, Propest showed the labeled binders that enclosed the signatures of the majority of volunteers they receive. The binders were labeled, “Probation, Truancy, Teen Court,” among others. The primary source of outside help they receive is through mandated statues.

A report from the Bureau of Labor and Statistics states that, in 2014, the most volunteered hours were through religious groups at 33.3 percent.

Ben Edfeldt, director of the Baptist Student Ministry said, “The idea is that even after their education is finished, they will stick to the community service that they have been introduced to.”

Edfeldt said, “It’s a great way for students to not only meet the needs physically, by serving meals, but to engage with community.”

Edfeldt described the activities that BSM contributes in the last Sunday of each month called Church without Walls. He and up to 15 students meet at Bridwell Park to minister and serve a warm meal to up to 150 low income and homeless. The meals can be anywhere from pulled pork to more commonly hot dogs depending on donating participants. Among other community work the ministry is involved in Mission Arlington during the Christmas months as well as helping local churches with repairs and after school programs for children.

“We want to feed their souls as much as their bellies,” said Edfeldt.

Jacqueline Gober, junior in education, said,” I don’t have the mindset that they’re homeless. They’re people. Just like anyone.”

Gober holds a position in the leadership team of the community outreach for the BSM. She smiled as she recollected her first trip to Arlington and how it touched her to give to those who had so little. The BSM welcomes volunteers of any major to become active in both ministry and community involvement year round.

Powerhouse companies like Google, Walmart and Wells Fargo are credited for being the most charitable businesses. Wells Fargo leads the pack by an astonishing $315 million in cash donations to low-income communities.

A-list celebrities make time for volunteerism near and far. Hilary Swank, most popular for her role in Million Dollar Baby, donated her time in India at an orphanage and U2 vocalist, Bono, founded ONE Organization to gain equality in Africa.

The University of Exeter Medical School in England reviewed 40 studies over a 20-year period and found a benefiting link between volunteerism and good health. The study concluded that those that were active in volunteerism showed lower depression levels, increased life satisfaction and 22 percent less likely to die. This would seem that the act of giving is just as beneficial to the giver as the person receiving the help.

The Black Student Union stays active with volunteering through local Boys’ and Girls’ Club and schools. Maia Cook, athletic training, junior and President of the Black Student Union said, “Being able to provide clothes to a kid that has to show up to school in pajamas because he has nothing to wear, or giving a little girl tennis shoes because she had to wear sandals in the winter is what resonates with me. The giving back.”

Operation Thanksgiving: Sheppard Air Force Base has numerous way to become involved for the holiday season or any season. Their site lists volunteer needed detailed descriptions with easy to navigate registration. During Thanksgiving and Christmas, families can “adopt” a service man/woman for Operation Thanksgiving. Those that would like to open their home and share Thanksgiving can contact Sgt Ferguson-Oliver and RSVP by Nov. 23.
Engage with the public: Faith Mission and Faith Refuge are the two homeless shelters in the area that can be contacted for volunteer work. Both facilities welcome any help to prepare or serve meals, donate time for transportation or host an event.
Light a Tree: The annual Tree of Lights will soon glimmer from the Chase Tower that is sponsored by Hospice of Wichita Falls. For $10, a light can be lit in the honor of a new child born, a tribute or in loving memory of someone dear.
Help Yourself: Calling 2-1-1 can connect anyone with local Food Pantry’s and State and Federal Funded Assistance like SNAP Benefits or WIC. Many local churches also have food pantries, for example, First Assembly of God and First Baptist Church.
Feast with Friends: For those students that aren’t able to go home for holidays but need away from campus for a change of scenery, there are some options around town as well. Eight local businesses will keep their doors open during the Thanksgiving Holiday. Cracker Barrel, Golden Corral, Applebee’s, Denny’s, Starbucks, Domino’s, Buffalo Wild Wings and IHOP will remain open.