Williams to retire from Study Abroad 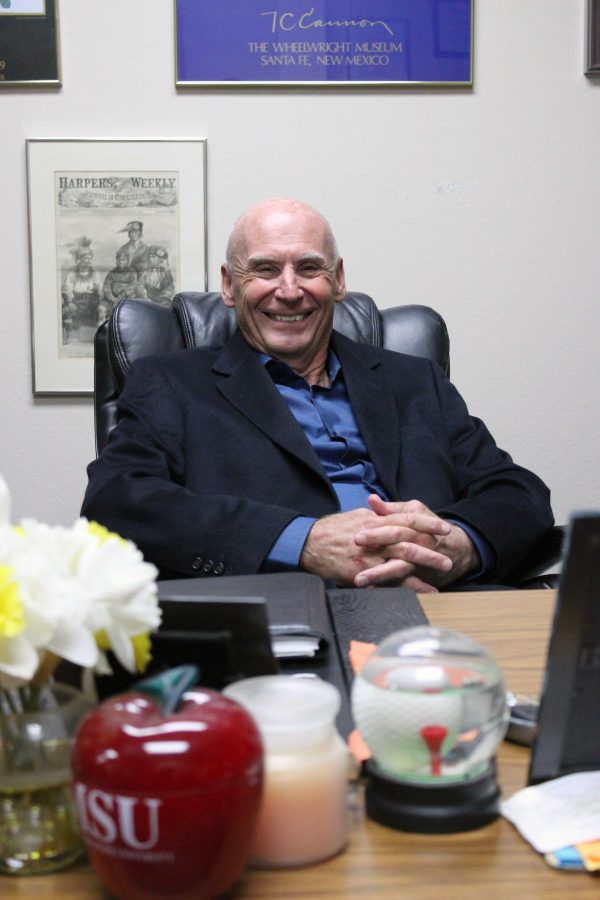 Larry Williams in his office in Bea Wood Hall. Williams has been at the helm of the study abroad program for about 30 years. Photo by Rachel Johnson.

After 30 years of visiting Europe each summer, Larry Williams will travel with the Study Abroad Program, his legacy, for the last time. Williams said he won’t miss the traveling as much as he will miss providing unforgettable experiences to students.

“You can’t memorize college,” Williams said, “but everybody will remember the time they spent in France. It is a life changing event, and for me to get to be a part of that, I’m very privileged.”

After taking advantage of an impromptu trip to London in 1985, Williams was inspired to give university students the same experience. But the start-up and administration of such a program was—and still is—very expensive and generally exclusive to private universities. To alleviate those costs, Williams had MSU join an existing group with fourteen to sixteen other larger schools in 1986.

Within the first five years, Williams found it easy to ask other professors of other subjects to allow him to speak to their classes. Through this, he was able to push MSU’s recruitment to the top.

However, there were issues. The current London program, though beneficial for all, did not offer MSU credits or say in its proceedings, causing Williams to look at alternative options early on. He approached financial aid and the Vice President at the time, Jesse Rogers, to formulate a plan of action.

“Study abroad has traditionally been a rich-kids’ program,” he said. “I made a conscious decision to go the office of financial aid first because I knew that the vast majority of the kids at university couldn’t afford the journey.”

The turning point came in 2000, two years after the preparation progress began.

“I made the decision that I was ready to do this: I wanted to break away and start a consortium for Midwestern,” he said.

To do this, he contacted Tarleton and New Mexico State, which both agreed to join the London program led by Midwestern State. They were later joined by five others. Such membership allows for the university to grow in recognition, on behalf of which Williams was recently approached by what may become the program’s ninth university, one that will push the pool of potential student participants to 70,000.

With so many moving parts, he said building the program was “like establishing a small satellite university.” Access to food, transportation, and care were all essential, and with so many students, the organization all of that was difficult.

“It’s a little tricky,” Williams said. At the start, he didn’t have any prior background in business or logistics to draw from, learning mostly as he went with the help of Study Abroad Administrative Assistant Dena Hardin and his staff. Even with all those details smoothed out, financial concerns for future development hung overhead.

“We knew we couldn’t sustain it because we didn’t have any money for long-term scholarship aid,” Williams said. “That’s where Dr. Howard Farrell came in.”

A friend of his for “a million years,” Vice President of University Advancement and Public Affairs Howard Farrell approached the Student Government Association with a request to add an “international fee” to tuition. At the passing of the resulting bill, the program was able to survive through funding for students, by students. It grew.

“We started to send a few students to Spain and France through the old consortium,” he said. “Again, I became disenchanted because we had no real control, no influence.”

In setting up his own program, Williams attempted to ensure the other participating universities don’t feel as he did. He said that universities should act as a team, reviewing the past year and voicing concerns and possible ideas of change for the next. All are allowed to suggest professors and course material. He has also kept the programs’ focus on academics, recognizing the danger of becoming an international tour. There have been, so far, very few academic issues, and Williams said he is pleased about that.

Even with these changes, MSU was still dependent on the old program to send language-oriented students abroad. With help from Honors Program Coordinator Juliana Lehman-Felts, Williams tested the possibility of extending MSU’s program to include the same.

Together, Lehman-Felts and Williams selected the appropriate sites in Spain and France and created a budget, receiving the approval of Provost Betty Stewart to add non-traditional courses for non-language major students.

“She has allowed us to be creative and to offer programs that are unique,” said Williams.

The current program has Spanish classes available with emphasis on business, education and healthcare fields. Next year administrators plan to offer one criminal justice course as well. Williams said he sees the knowledge of multiple languages, like a globalized viewpoint, as a marketable skill—one that all students should acquire to put themselves above the competition.

Now, Williams has traveled with his programs all over Europe for twenty years, allowing a thousand students the unique opportunity to do the same and helping award more than $1 million in scholarships. Now, with his retirement in May quickly approaching, his final week in London this summer takes on new meaning.

“I haven’t really thought about it because I haven’t left yet,” Williams said. “Midwestern is a very good school, they’ve treated me well. I had a great career here. I’ve seen more of the world than the vast majority of people ever have a chance to see… I feel honored to be a part of all that. I really have no regrets whatsoever. That’s saying a lot.”

At the same time, Williams said he feels remorse on behalf of his wife and family.

“I have been gone over four years on the road or in Europe. That’s a long time to be away from home, and I miss home,” Williams said. “So, when I think about retiring, I think that it is time for somebody like Michael Mills, who is young and bright and full of new ideas and energy, to do it.”

He will spend his final days with the program guiding Mills, director of housing and dining services, in the finalization of students’ overseas accommodations.

“It is a daunting task—especially for the first time—to make sure that everybody is there, to get everybody in, to get things started,” Williams said. “I can’t believe it’s over.”

Mills is happy to take on the challenge.

“Any time I can work with students is important,” he said. “I’ve spent my whole career in student affairs and helping students with their housing issues… [Williams] has built an excellent program. He has taken study abroad from nothing at Midwestern and built it into not only a great program for students, but [something] that should be a strong selling point for this university and I’m just very honored to take over after him. ”

After leaving London, Williams said he will be content to settle in with his wife and friends in Wichita Falls.

“I never want to go back to Europe. Like I said, I’ve been doing it for 30 years—that’s enough. That’s enough for anybody’s one lifetime… I wish I had seen parts of South America. I’ve been to a dozen countries, and been lost in most of them at one time, but I always got found. I’ve had a lifetime of adventures, enough for me, anyway.”

With a gleam in his eye, he mentioned only one other possible journey.

“If I had one [more new] trip, it would be a first-class cabin in Minneapolis on a Mississippi river boat down to New Orleans. I think that would be cool… a first-class Huckleberry Finn trip,” he said.

What he sincerely hopes is that his legacy, not his name, will impact students most.

“What I really, firmly believe is that these kids will always remember their time that they went abroad,” he said. “It is not about me, it’s not about this office: it’s about what they will remember, and they absolutely will remember.”