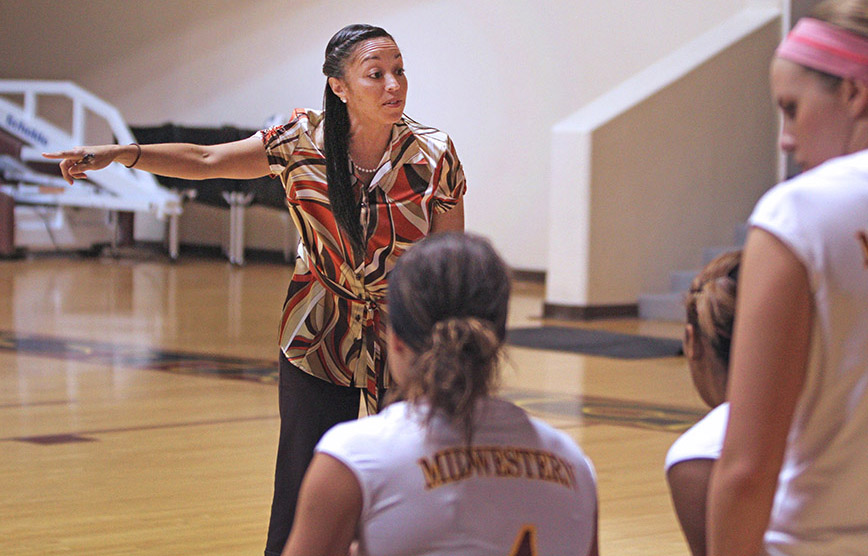 Then head coach Venera Flores-Stafford talks to the team during its match against Texas A&M University-Kingsville. MSU lost to TAMK in the fifth set. Photo by Lauren Roberts

Athletic Director Charlie Carr relieved head volleyball coach Venera Flores-Stafford of her coaching responsibilities this week after 16 years with the program and 14 seasons without a playoff appearance. Carr said the search for a new coach has already begun.

“She had many jobs. She was the head coach as well as the athletic programs senior accountant and volleyball recruiter,” Carr said. “She wore many hats.”

Coaches often have more than one job on campus, such as teaching or advising, but Carr said that hers were particularly demanding.

“Coaches have many jobs, but hers were very heavy,” Carr said.

Flores-Stafford, who made $60,680 this year, will still serve as associate athletics director, and Carr believes the change will be beneficial to both sides.

“It’s a win-win,” Carr said. “She has a family and works hard, now the new coach can be focused on volleyball and not try to balance too many balls in the air. The kids deserve that.”

Interviews will open this week, and Carr said thanks to MSU’s successful history, he is confident the job will be filled by March.

“There is always a lot of interest,” he said. “MSU has a history of winning, and people want to be a part of that. It’s a blessing.”

The decision has come after a four-year stretch of miserable records against conference opponents, going 22-50 against in-conference teams since 2009.

“They can achieve more, and they want to be better,” Carr said. “A focused coach will help with that.”

According to volleyball players Meghan Bettis, undecided freshman, and Morgan Haire, mass communication freshman, the changes will be welcomed, as the players and the coach would often struggle to get along.

“She was overaggressive,” Haire said. “She would mislead us and threaten our scholarships. We were frustrated. Part of being a coach is bringing the team together, and she didn’t do that.”

Since Flores-Stafford took the helm of the program in 2004, the team has made the NCAA playoffs only twice, and only four times have they had a winning record. Bettis feels like the volleyball program has been a “few steps below” other athletic programs on MSU.

“We are the only MSU sport without a championship,” Bettis said. “It doesn’t feel like an MSU team, but we can change that.”

Bettis said the team has a very high potential, and is confident that a change in staff will improve the teams morale and production.

“We definitely have room for improvement,” she said, “But we already have the talent. We even started out really well last season, we won four out of five games in our first tournament, then won the next three. We were just frustrated and fell apart.”