Music of the Hardin bell tower 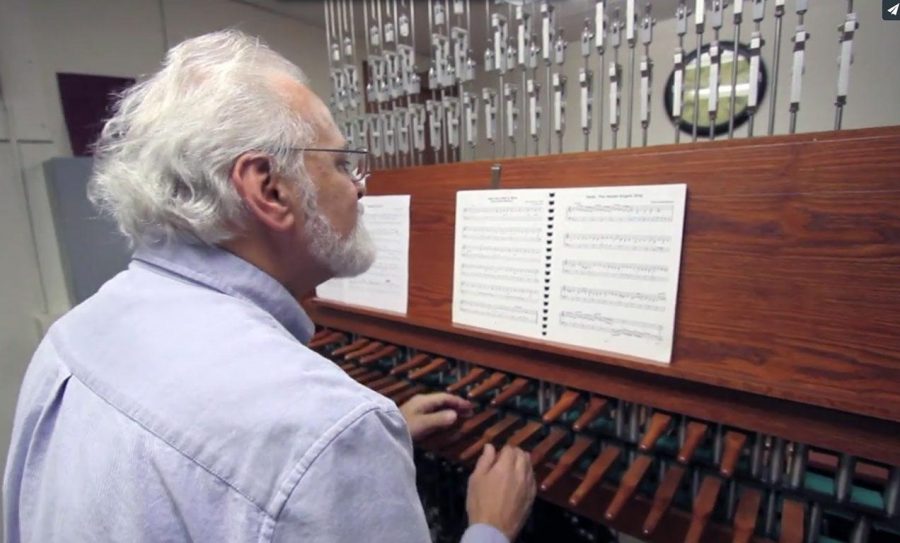 Jim Quashnock, member of The Guild of Carillonneurs, plays Christmas music on the carillon for the MSU-Burns Fantasy of Lights opening ceremony. Photo by Lauren Roberts

Up on the highest room in the Hardin Administration building, 120 steps from ground level to the top – with no elevators, Jim Quashnock, member of the Guild of Carillonneurs, plays Christmas music on the carillon for the MSU-Burns Fantasy of Lights opening ceremony.

The Hardin tower was erected in 1937 housing a few small classrooms and storage space. In 1952 former Midwestern University president James B. Boren heard carillon bells at another college and the 35-bell carillon was cast and placed in the Hardin bell tower the same years making it the first traditional carillon in Texas. During the renovation in 2003 two additional bells were added and electronic strikers connected to a computer was added.

Quashnock said, “A lot of people think that this is fully automatic and it does play the Westminster throughout the day and chime the hours but if there’s any music being played it’s a person.”

Quashnock is a professional organist and started playing in 1965. The carillon is a similar instrument to the organ and piano in terms of music and the separation of hands and feet.

“That helps when getting oriented to this instrument but the technique is totally different,” Quashnock said.

It’s not played at all with the musician’s fingers like they would with a piano or organ. 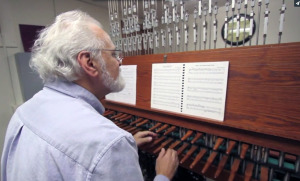 Jim Quashnock, member of The Guild of Carillonneurs, plays Christmas music on the carillon for the MSU-Burns Fantasy of Lights opening ceremony. Photo by Lauren Roberts

“If there is a music student that would like to play we would welcome them to come up here and play, with some supervision and guidance. Any student that is familiar with piano and organ more so than single-note instruments because you are reading multiple staffs,” Quashnock said.

There is no private playing on the carillon bells but housed in the same room is a practice console that looks identical to the original. Instead of bells it uses an internal xylophone.

Quashnock does not have a schedule set for when he plays the carillon.

“I’ll be playing on and off again as the spirit moves me during the Christmas season I’ll come out in the evening and play when the people are usually out on the weekends, Saturday and Sunday nights. But, I’m not on any given schedule.”

The Fantasy of Lights has individual displays with themes or characters from children’s stories, fairy tales and holiday themes. The Fantasy of Lights display opened early this year before Thanksgiving and will continue through Dec. 28. The lights turn on at dusk and turn off at 10 p.m. Sunday through Thursday and 11 p.m. Friday and Saturday.