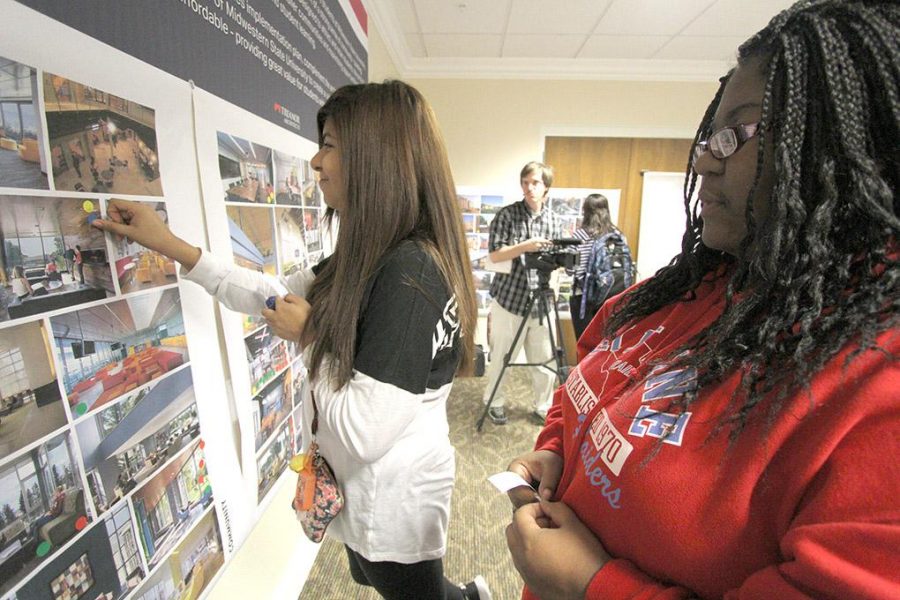 Alexis Carrizales, pharmacy freshman, and Keona Rollerson, computer science freshman, use a round blue sticker to choose the type of setting they would like in the community area of the new dorm. Students met with the Treanor Architects at the new housing meeting in Kiowa Wednesday. Deb Ebersole, partner at Studio D, said having students use color-coded stickers helps to track what qualities they want in the dorms. Students could choose from interior, exterior, community spaces, etc. Ebersole said, "Patterns will emerge with some of the same photos chosen." Photos with the most stickers on them were ones that had big windows, were modern, flexible and had open spaces. Photos by Lauren Roberts

About a dozen students met with Treanor Architects Oct. 15 to share some of their thoughts on a new resident hall scheduled to open fall 2016 with architects.

Their suggestions included having bunk beds, having a coffee shop that is open later and making sure lights don’t go directly over the beds.

Students liked the idea of being able to share their thoughts on the new building.

“Just being able to have different choices,” Payton Hreha, freshman in computer science, said. “They thought just about everything to where you actually got to voice your opinion and they could have just do it to make it work for everyone.”

No matter what idea the students had, the architects said,  they weren’t bad.

“It’s a collaborative process, any idea is a good idea,” said Joe Stramberg, project manager and principal of Treanor Architects.

One of the architects said she wants the new residence halls to feel like more than just a school building.

“It will have a learning environment feel to it, but this is where you are going to live,” Deb Ebersole, partner studio d, said. “Faculty is more conceded of how it is going to run and the cost it, students say I want to live there.”

The process of a project this size, including a tour room for new students, an office for the hall director and a state-of-the-art computer lab, usually takes some time.

“It usually is around an eight- to nine-month process for design and documents until construction starts,” Stramberg said.

University officials said they want a place for students that they can be proud to live in.

“We want a place that students don’t just live in, but a place that they love,” Matthew Park, associate vice president for student affairs and dean of students, said.

The funding for building the new hall will not come from students tuition or fees.

“The building will be funded through student rent of the new dorm,” Park said.

The new resident halls are expected to start spring semester of 2015 and be ready for students to move in on August of 2016.