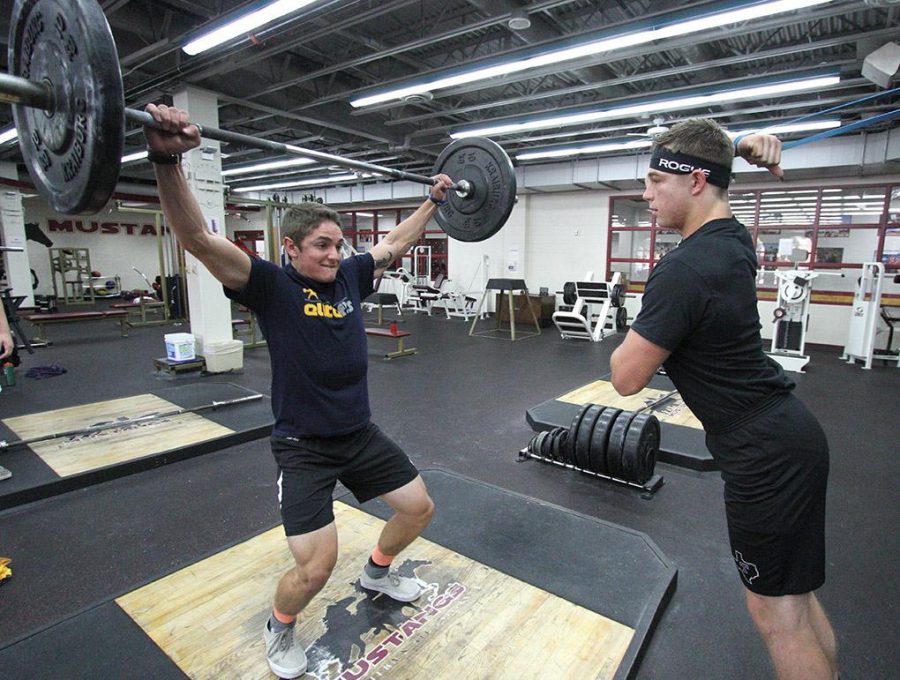 Michael Gintzler, pre-med sophomore, does a snatch lift as Levi Taylor, kinesiology sophomore, stretches in front of him at powerlifting practice Monday in the coliseum weight room. Photo by Lauren Roberts

It’s as simple as picking a weight up and putting it back down.

But it’s not as easy to find someone who wants to squat more than 500 pounds or compete in kilts as members of the five-member, 2-year-old powerlifting team, team Endunamoo, do.

Drew Hill, coach of the team and graduate student in exercise physiology, said, “It takes a long time to get strong. So you’re either committed or you’re wasting time.”

A typical workout for these powerlifters doesn’t start right away. Hill takes the team, a campus club rather than a varsity sport, through a rigorous warmup before even touching the weights.

“Lunges, pull ups, leg kicks and everything in between will happen in about a 15-minute window,” Hill said. “Then we begin to kick the intensity up a notch.”

“Once the weight gets heavy enough to bend the bar, we start our workouts,” Hill said.

And they have a different set of workouts for each of the five days they practice.

The lifters chalk their hands up and tighten their belts to prepare for the lifts. After meeting proper depth at each lift, their caller tells them when to bring the weight up. By the time their knees are shaking, it’s time to move on.

“A normal person’s workout would end once our squats are finished. To us we just had the appetizer. By the end we’re a mass of swollen, sweaty, and bathed in chalk monsters,” Hill said.

This sport isn’t for the faint of heart, breaking records and bringing home medals in multiple categories.

This year, the lifters are already training for their first upcoming event in October, the Highland Games, a Scottish event which occurs nationwide.

Second-year lifter Jared Smith, sophomore in radiology, said, “We have been training for the Highland Games, Scottish games where everyone has to wear kilts. We have been doing Olympic lifts and throwing in preparation for all different events at the games.”

Team Endunamoo, a team with the same name as Hill’s non-profit religious company that sells shirts, will compete in events including stone put, similar to modern-day shot put, tossing a heavy weight over a bar and caber toss, throwing an enormous log in the air and having it turn over.

While being a powerlifter means lifting a lot of weight and throwing it around, it does not mean just drinking a bunch of protein shakes day in and out. Still, the lifters do have to watch what they eat so they can stay in the appropriate weight class.

“We diet during the season when we have to drop a class. I cut for about two months and dropped 20 pounds,” Hill said.

Smith said, “The extent of the diet and how hard we have to diet depends on how much weight we have to lose, even if it means not eating or drinking.”

Team Endunamoo isn’t just powered by their bulging biceps and terrifying triceps. Rather, they rely on a more spiritual form of motivation.

“Endunamoo is a Greek word that is found in Philippians 4:13. It means to be given strength that is superior as in God is giving us strength to do things,” Hill said.

Team Endunamoo’s logo is an illustration of Jesus Christ holding a barbell above his head.

The club members, not affiliated with the athletic department, practice weekdays in the weight room at D.L. Ligon Coliseum due to Hill’s permission from the head strength and conditioning coach. They previously practiced in the Wellness Center, but chose to go to the Coliseum because of the higher quality facilities and the option of having more room to freely slam the weights.

So although the team might have their plates full – or empty depending on their diet –  with classes, dieting, competing, the powerlifting team keeps it simple by just doing what they do best: picking up weight and putting it down.