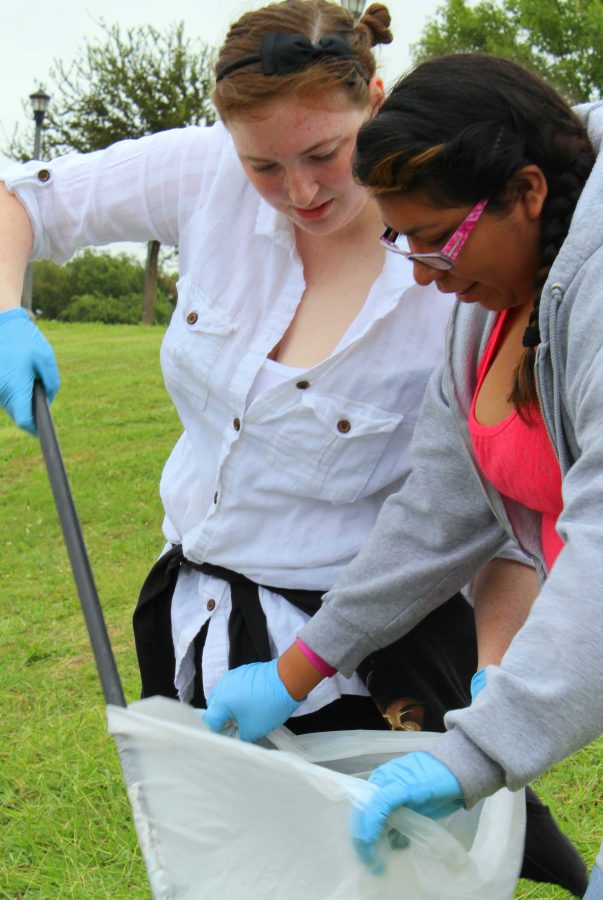 Caitlin Frame, English/Business Sophomore, and her friend Selena Punte, Market Sophomore, are here at the Sike's Lake clean up. They are picking up trash along the edge of the water, trying to do what they can to help out the environment and the community.

More than 100 students and community members came together early Sept. 6 for the Sikes Lake Cleanup. The Rolling Plains Chapter Naturalists organized the event and have kept it running for more than eight years.

Many volunteers said they participated to fulfill an honors requirement, but freshman in English, Sarah Welborn, said she had more than one reason to pitch in for the annual effort.

“I am here because I believe in keeping lakes clean, and I also get to keep myself in the honors program by performing community service, so there are a lot of good reasons to be here,” Welborn said.

Most formed small groups to work with, and after receiving gloves and equipment, they began their trek around the running paths, many starting at the water’s edge and moving outward.

“Well first I came here because it was a requirement for my honors program, but then I came here the other day and I walked by the lake over the road and I saw how dirty it was and I just knew I needed to come and get this done,” said Hana Getahum, nursing freshman. “I just feel good about being here because I came here, I got this done, and it’s gross because a lot of this stuff has been here for a while, but it needed to be done.”

Members of the softball team also volunteered to help after the coach suggested the opportunity.

“I came out today because the softball team was told to, because we run around here and we’d like it to be pretty,” senior in biology  Kelly Schafer said. “I do get personal gain from this though because afterwards I feel great about it, and I like to be a good Samaritan and help the community out.”

Cara Tilton, nursing sophomore, said, “We have a bond to this lake, so we thought we’d come today and pick up trash all together and make it look beautiful again, because we run this lake all of the time and it just makes sense to be here.”

Of the 100 or so people that showed up about half of them came from outside the MSU community.

“I’m here to clean the lake because our history teacher told us about it, so we came here to help out,” Morgan Harsh, junior at Hirschi high school said. “We’re also a part of a program called CAS, which is Creativity Action Service, so we do things that wouldn’t benefit ourselves, and we have fun while doing it.”

A family of six, including a few MSU alumni, also gave some of their time.

“We came out as a family today, all six of us, to get volunteer hours and help out today. If you’re like anybody that goes to, or has gone to MSU, you know that the lake can get pretty bad,” Jessie Greenwood, an MSU graduate said. “It’s just awesome to see how many people actually showed up for this. It’s a really good thing to do, and a great experience.”

While many have connections to the lake through sports or other activities, one couple had a completely different reason for attending the cleanup.

“Not only do I get extra credit for this, but I actually proposed to my fiancée here this past March, so I thought it would be good for us to be a part of keeping it clean,”  Chris Dorris, human resources master’s student said.

Sarah Lindeman, psychology graduate and Dorris’ fiancée, said, “Aside from school, and extra credit, we also get personal gain from this because it’s an important place for us.”

Some students learned the cleanup effort is made more difficult when trash is allowed to build up in the lake.

“The biggest challenge we’ve faced today is trying to get all of the garbage out of the lake, because it’s really hard to get to some of it,” freshman in management Asquith Watson said.

A lot of the trash had actually floated out into the lake and got stuck between rocks and branches under the water. The grabbers they used could only go so far to get the rubbish out, so many climbed into the water and used their hands to reach things they couldn’t get from the shore.

“Not falling into the lake is one of the most difficult challenges,” senior in nursing, Kristen Chancellor said. “I’ve almost fallen in so many times.”