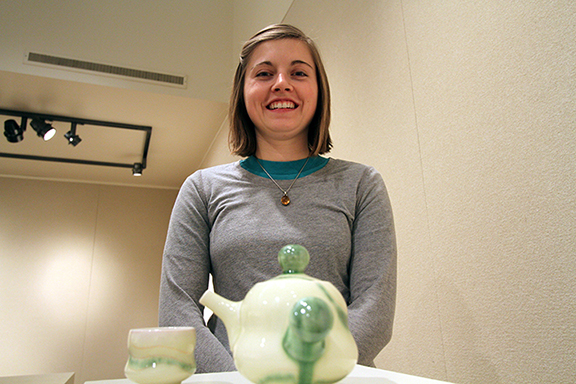 Chanda Droske, resident artist, stands behind a teapot and cup she made while setting up her exhibition in the Juanita Harvey Art Gallery. Droske's work will be displayed along with Mike Kern. The opening will be this Friday at 6 P.M. Droske said," It's nice that people can use my work as well as admire it."

Two resident ceramic artists, both who produce functional ceramic items such as bowls, platters, salt and pepper shakers, cups and plates, will exhibit and sell their work Jan. 17 in the gallery at the Juanita and Ralph Harvey School of Visual Arts.

Every year, residents are accepted into the ceramics department to work with students and staff of the department as well as to utilize its equipment. As residents of the program, they receive free room and board in exchange for teaching ceramics classes.

Mike Kern and Chanda Droske, the two visiting residents from Whitewater, Wisc., met in college and both have degrees in pottery and ceramics.

“You don’t apply together, you just hope you get into a program together,” Kern said. “We were accepted into five other programs. When we found out that they were only asking for one person here, we asked if we could come here together and we got it, so we came here.”

Until now, most residents have only been able to display their art in collective shows, like “The Empty Bowl” exhibition last semester.

“As far as I know, no other residents have ever had a gallery opening while they were under residency here at MSU,” Gary Goldberg, professor of art, said.

Droske, 25, received her bachelor of fine arts in ceramics from the University of Wisconsin in 2012. Since graduating, she has worked as a ceramic technician and is now teaching as a resident. She began her interest in art in high school and went on to get her degree. She makes functional pottery with inlaid slip designs while utilizing her vast color palette. She has had her work exhibited in shows such as the “Drink This!,” the Workhouse International Ceramic Cup’s show, and the National Council on Education for the Ceramic Arts national student judged exhibition.

“I hand draw everything and I spend hours on each piece perfecting it, on top of that, I also make my own glaze for my pottery,” Droske said.

Kern, 27, also a Wisconsin fine arts graduate, said he is interested in creating highly designed utilitarian ware. He started out by taking a ceramics class in high school for two semesters where he found his passion. Within the next five years he plans to make use of his skills and purchase land where he will have a studio just for his pottery.

“My favorite thing about pottery is being able to make things with my hands that can actually be used. I don’t see a point in buying things in stores that can just be made by hand,” Kern said.

He has been exhibited in shows such as “Strictly Functional Pottery National” and NCECA’s nation show.  He has also been published in Ceramic Monthly’s Undergraduate Showcase.

The works produced by Droske and Kern will be for sale at their exhibition, each item priced from $20-$300.